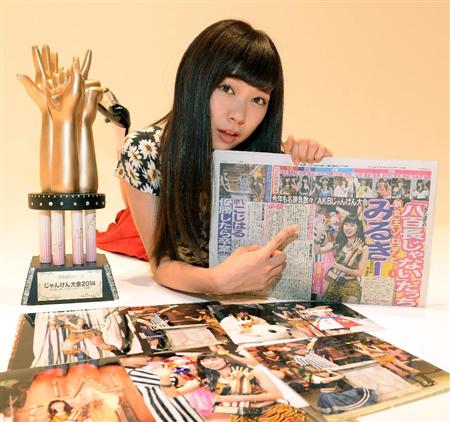 On September 17th, NMB48’s Miyuki Watanabe (21) got a solo debut from winning the “5th Janken Tournament”. On the 18th she was interviewed by Sankei Sports.

After the tournament, Watanabe went out to eat with producer Yasushi Akimoto (56) and fellow members. Then she went on to appear live on “AKB48’s ALL NIGHT NIPPON” from 1 until 3 in the morning. The super busy new Janken Queen appeared for her interview at 9am and didn’t appear tired at all, despite having less than 6 hours of sleep.

Check out the interview under the cut!

Interviewer (I): You did your radio show until 3am, weren’t you sleepy?

Miyuki (M): I was just so nervous because of ‘janken’ that I didn’t feel tired at first. Then in the middle of the radio show my anxiety started to fade away and then I got really sleepy. But we talked a lot so it went by really fast, in the end it was all okay.

I: Were you able to take a bath?

M: I was so sleepy that I just kind of wobbled into the bath.

I: Tell us how you feel about winning.

M: It still doesn’t feel real. When I see myself on the news and in the newspapers it all just feels like an illusion. I see someone that isn’t me.

I: What kind of song do you want your solo debut song to be like?

M: Maybe a dance song or a typical idol song. Either of those would be nice. A sexy and cute song like ‘Zipper’ or ‘Waruky’ would be great too. I want it to be a cheerful idol-type song.

I: Did you think you would win?

M: I never thought I would make it from the first match until the end. I don’t think I would have any regrets, even if I had lost to Kojima (Haruna Kojima) in the last match.

I: Did you talk with Kojima after the tournament?

I: So by winning you were able to stop Kojima’s graduation announcement.

M: I don’t know if that’s a good or bad thing, but I love my senpai (senior), so I’m glad that I prevented her from announcing her graduation.

I: What do you want to do now?

M: I want to have a relaxing chat with my mom and go to sleep. My mom is coming to our (NMB48) concert tomorrow (September 19th) in Nara. My mom makes tuna salad with yams and wasabi and it’s SO good and I want to eat that too.

I: You were able to go from the ‘telephone janken’ tournament to win in the preliminaries and now you’re really standing on top.

M: I wish the real thing was like the telephone one. I was so nervous and really thought that I was going to lose, because it wasn’t done over the phone. I never felt like I had it, but I knew Yoshinori Kobayashi-sensei and critic Tsunehiro Uno had predicted I would win in the official guide book. That really hit me for the first time. I was getting power from everyone. I had people anticipating that I would win, so I thought it would be best if I used that power to my advantage.

I: Do you think your solo single will include a special handshake event ticket?

M: I want it to be a new kind of event. I would like a handshake ticket to be used as a concert ticket and I want to have a solo concert all over the country. I want it to be somewhere that really suits me well.

I: I heard that you don’t have much confidence in singing.

M: In August the AKB groups had solo lives at our Summer Festival. They were great and seemed popular. People who saw them told me that they were really awesome, so that’s given me a little bit of confidence.

M: 20 has been a great year for me, so as a 21 year old I want to send everyone lots of smiles and be someone that people just can’t get enough of. 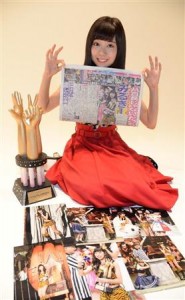 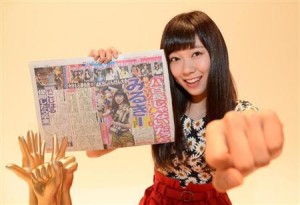 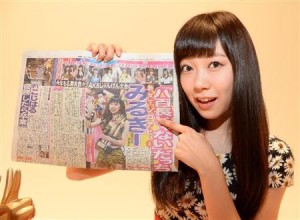 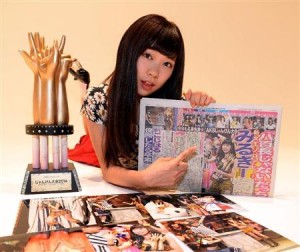