In days of late, Oguri Shun’s escapades have been the talk of Japanese media and internet alike. With his wife soon to be giving birth to their first child, rumors of Oguri Shun’s alleged infidelity and negative views about marriage have lit up message boards, entertainment websites and the blogosphere. Yamada Yu has also made strange Instagram posts and blog posts which have netizens worried that she is not in her right mind because of her husband’s infidelity. So, what exactly has Oguri Shun been up to that has caused such controversy?

Rumors that Oguri Shun was quite the playboy have swirled even during his days as a bachelor. He even once infamously dated current extramarital affair controversy queen Yaguchi Mari. 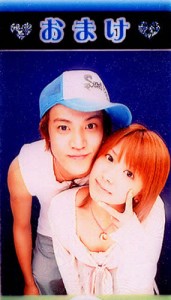 Despite his playboy ways, he settle down and married Yamada Yu in a fairy tale wedding that took place in Hawaii, with guests including former co-stars and oft rumored couple Inoue Mao and Matsumoto Jun. However, even with a wedding ring on his finger, the rumors of Oguri Shun’s infidelity still persisted. In more recent times, these rumors have gained a lot of heat, especially with the birth of his first child drawing ever nearer.

Friday Scoop: Oguri Shun and Kouhai Check in to an Expensive Hotel Together, (Allegedly!) Call Prostitutes

According to the tabloid Friday, a slightly drunk Oguri Shun and his junior from the same agency, Kasahara Hideyuki checked into an expensive hotel together. 30 minutes later, two well stacked beautiful women appeared in white Sedan at the hotel, where they then went to the same room that the two actors were in. Then they then entered the room, where they spent the remainder of their time doing things that have yet to be fully revealed. Apparently, the group spent over 90 minutes in the room together. After the ninety minutes were over, they checked out of the hotel and left the premises. It has been said that the two utilized a call girl service. The fact that Oguri only checked into the hotel for 90 minutes was suspicious, and the fact that two women soon joined added more suspicion.  What’s more, this occurred all the while Yamada Yu sat at home pregnant with Oguri Shun’s child.

These are the pictures that were captured that night: 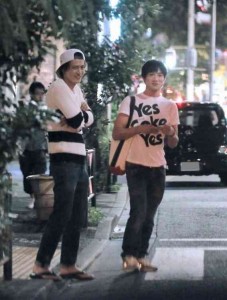 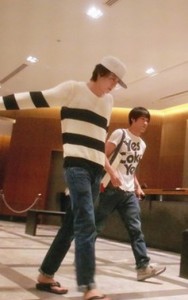 For years, rumors of various relationships with co-stars and fellow actresses such as Ishihara Satomi and Kuroki Meisa have appeared in the press. Apart from that, he has been said to frequent cabaret clubs and make advances toward the women who work in these clubs. Ever since he was single, he has always been thought to have a way with women. However, according to a hair and makeup artist that has worked with Oguri Shun, marriage hasn’t changed his habits at all.

According to this person, Oguri still goes to Hiroshima with his fellow actor friends to party. It seems that among the women he has met there, there is one that has particularly caught his interest, and he is even renting an expensive apartment for her.

But these two (alleged) scandals don’t top the biggest of all, which is a possible sex tape.

Recently, a woman has been trying to shop a sex video to tabloids that she claims involves Oguri Shun. The woman is demanding 300,000 yen for the video, which she claims was shot with the actor. According to Cyzo the woman sent an email to a weekly magazine claiming she was in possession of a sex tape of herself and Oguri Shun. The woman then sent the video to the magazine. The editor of that magazine stated:

“From just having watched the video alone, I can see a man that looks like Oguri Shun, but I can’t verify if it is actually him. The woman works at a call girl service and she has records of the hotel they stayed at and the time, and she can prove the details of what happened when they slept together. However, if the video is released, she will have to quit the place she is working at, so she is asking for at the very least a sum of 300,000 yen. When I told her that there is no magazine that will pay that price, she hung up the phone.”

The woman also too her story to a Sports Magazine. After being told that they could not handle such a matter, they introduced it to an evening magazine. At that magazine, she lowered her demanded price to 200,000 yen, but was told that they could only provide 30,000. She then hung up the phone again, saying that their offer was ridiculous.

It has still not been confirmed if it was indeed Oguri Shun in the sex tape.

Oguri Shun’s affairs have now become so infamous that he is even being referred to as the Tiger Woods of Japan. For all we know, it is only a matter of time before a possible string of mistresses may come forward. Of course, the validity of tabloids and rumors can’t be completely trusted, but with these constant rumors appearing, one can’t help but wonder if there is at least some thread of truth to them.

*NOTE: All information and allegations in this post were not created by Arama Japan, and the writer of this article nor any other contributors to this website can prove this information is factual. Again, these are NOT rumors fabricated by us. The information from this article was retrieved from Japanese blogs and tabloids, which you can see in the sources listed above. We do not claim any of this information as factual and leave it all to open speculation.