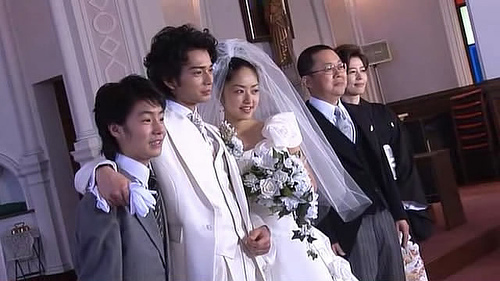 Inoue Mao (27) who will star in NHK’s Taiga drama “Hana Moyu” and Matsumoto Jun (31) of Arashi have gained a lot of attention for the alleged announcement of their engagement which is said to be happening by the end of this year.

“It seems that Johnny’s Jimusho, who was against their relationship has reluctantly accepted it. It is said that aside from that their engagement will be announced at the year’s end, and the wedding ceremony will take place when the filming for Inoue’s drama ends after September of next tear. At any rate, their relationship has been nine years long.” (A reporter for a women’s magazine)

Matsumoto and Inoue met when starring together in the drama that aired in 2005, “Hana Yori Dango.” From there, their relationship started.

“They were seen on dates multiple times, but because Johnny’s Jimusho greatly opposed the relationship, the vast majority of women’s magazines were pressured to not report it. After that, talk of [Matsumoto’s] relationship with Inoue fell through. (An evening paper reporter)

There were also rumors of love blossoming between Matsumoto Jun and Nakama Yukie who starred in the drama “Gokusen.”

“Nakama treated Matsumoto to meals in her home but it wasn’t a romantic relationship. Other than Nakama, there were rumors of relationships with Shibasaki Kou and Naka Riisa, but Inoue was always his favorite.” (The previous reporter for a women’s magazine)

In 2013, reports of Matsumoto and Inoue attending actor Oguri Shun and Yamada Yu‘s Hawaii wedding together fluttered about.

“Furthermore, the executive vice-president of an apparel company who was invited to the Oguris’ home wrote on his blog “I was even introduced to Inoue Mao-chan and MatsuJun.” That blog entry was deleted. There were also complete reports of the couple’s relationship in weekly magazines, but those were replace by Arashi‘s gravure.” (A publisher’s associate)

The Johnny’s side was nervous to that extent. On the other hand, the forbidden love deepened.

“This year, Arashi will host the Kouhaku Uta Gassen. As a matter of fact, the day before last year’s Kouhaku the couple ate yakiniku with the Oguris in the city. On that occasion, concrete talk of the couple becoming comrades with Oguri and Yamada when Matsumoto and Inoue get married arose.” (Entertainment associate)

They both wear on their fingers matching rings from the famous brand “Boucheron.”

“It is quite magnificent. For Johnny’s they have the painful past of suffering a big embarrassment of Kimura Takuya and Kudou Shizuka‘s marriage being leaked. They want to avoid just that. The possibility of an engagement announcement by the year end is high.” (An associate of Wide Show)