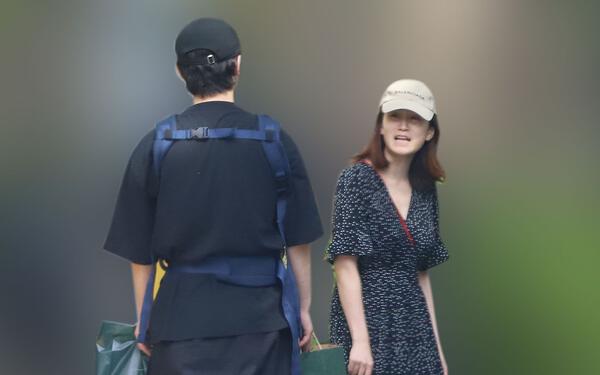 On January 30, Sankei Sports reported that Atsuko Maeda and Ryo Katsuji are currently in talks for a divorce. Both have lawyered up, beginning divorce talks as speedily as they were married only after four months of dating. This is a reprint of a July 2020 issue of Shukan Bunshun, reporting on the strained nature of their relationship (all ages, etc are as they were at the time of the 2020 print).

I don’t want to go home

“I don’t want to go home”; “It seems like he isn’t going home” – these are what various witnesses including co-workers and acquaintances of Ryo’s mother have been saying as of late, highlighting the current strained state of their relationship.

According to one witness, the family moved to an upscale residential area in the center of Tokyo since Atsuko gave birth to their first child. This place was bought using her personal agency, and the couple soon prepared a place for her parents to stay with them.

Originally, this was Ryo’s idea – he was the one who suggested that she could leave their child with her parents as she worked. Atsuko was ecstatic at the news, as she has mentioned frequently in the past just how much she loves her parents and wants to become a mother just like her own.

But this plan backfired on Ryo. He was soon isolated in his own home, with Atsuko often devoting herself to family life – both her parents and their child. People thought he was doing well at least, given that the notorious drinker skipped out on invites to go drinking with his friends, but…

Even this magazine, Shukan Bunshun, witnessed the couple fighting in public. While Atsuko was injured in May of last year, she seemed to be refusing Ryo’s help after being released from the hospital, going so far as to try and walk without his assistance despite having a leg injury. When this magazine was at the scene, it seemed almost as if it was Atsuko wearing the pants.

When Atsuko returned to work and was cast in the NHK series “Densetsu no Okasan” for February of this year, acquaintances reported that Ryo was taking care of their child when she was away for a filming shoot for three days, with his parents complaining about the situation.

Trying to patch things up by moving without the extended family…

Finally, they moved yet again in March of 2020 – just the two of them with their child – after discussing next steps on how to fix their current family life.

Even then, however, not everything was fixed. Ryo seems to be harboring an inferiority complex, as he compared his own career with that of his wife’s, who notoriously centered AKB48 for seven straight years, and even after her pregnancy was invited to lead prominent TV shows.

“To the world, Ryo is still referred to as ‘Atsuko Maeda’s husband’. He really can’t stand this, and has aspirations of aiming higher. Even compared to his good friends Shun Oguri or Takayuki Yamada, he has yet to be the lead of any primetime TV show. Under the guise of concentrating on his work, he’s rented yet another apartment, and seems to still be there by himself, but you have to wonder what he thinks of his wife and child…” (Ryo’s mother’s acquaintance)

While Ryo has been working hard, neither agency would respond to requests for comment, and this magazine has not yet been able to find this “flying getaway”.