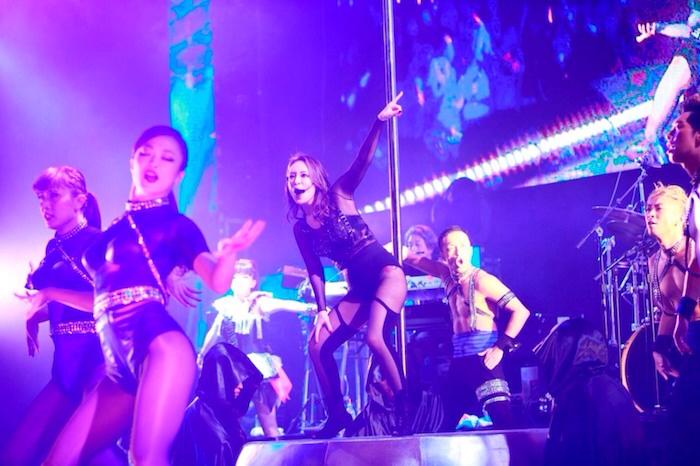 Singer Ayumi Hamasaki (36) has (almost) always had the honor of carrying out the final performance at avex’s summer festival a-nation.

This year, she performed at four dates in Tokyo and Osaka.

Besides Hamasaki, South Korean top-tier acts like BIGBANG, Super Junior and EXO as well as popular Japanese performers like Sandaime J Soul Brothers, AAA and E-girls were on the guest list.

However, even with such an all-star lineup, not all tickets were sold this year.

“Even though a-nation looks tremendous at a first glance, a lot of fans do not enjoy it that much because their favorite artists’ performances are short. There are plenty of other music events in summer, ‘Summer Sonic’ for example, so people get tired of festivals.

Ayumi Hamasaki is no longer a hitmaker. Her last #1 single was released in 2010 and her 2014 single ‘Terminal’ peaked at #24. The same goes for her albums. Her last #1 was ‘LOVE again’ but the two CDs that followed reached #5 and #4 on the weekly chart.

Certainly, there are still a lot of people who follow Ayu but most of them are in their 30s. They are probably married already and sure don’t want to go to a summer festival just to see Ayu carrying out the final performance.” (Industry official)

If Hamasaki was still as popular as she used to now, her fans would have rushed to ticket booths just because of her name was on the perfomers’ list.

People on the net are saying that the “tragedy of 2012 has repeated itself”. By that, they are referring to an incident that happened three years ago, when Hamasaki was scheduled to perform right after BIGBANG. As soon as BIGBANG’s performance was over, half the audience rushed to the exit and left during Hamasaki’s performance.

This year, the same thing happend when she entered the stage after EXO’s performance.

Not just the demand for her CDs, but also for her lives seems to fade away.

Hamasaki is struggling in other areas as well.

Her fans who watched her segment at a-nation voiced their dissatisfaction with her cover of ‘DEPARTURES’ (globe) which she performed together with legendary music producer Tetsuya Komuro:

“She can’t reach the high notes”
“DEPARTURES isn’t such a vulgar song!”

Also, rumors about a personal crisis have surfaced. It seems that her husband, an American UCLA student, wants her to gain more weight.

“That her husband told her to gain some weight is because unlike Japanese men, American men prefer glamourous women. However, here in Japan, Ayu is a top artist and songstress.
Even if she gains weight, there are limits because she also has to maintain her figure for her fans. Before being a wife, Ayu is a singer and he doesn’t understand this because she is not well known in America. It’s nothing strange that conflicts like these can tear a marriage apart.”

Hamasaki got married only a year ago. Is a second divorce drawing closer? Or is she considering to retire for her husband?