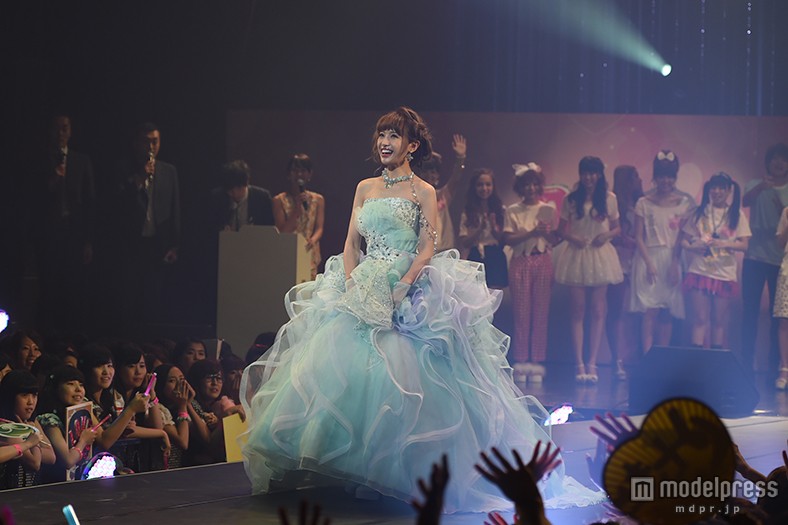 It was announced last month that top model Kumicky would be leaving fashion magazine Popteen. That day came a lot sooner than many fans thought as Modelpress reports that she has officially graduated.

In a Popteen-sponsored festival at Zepp Tokyo earlier, the model looked back at her six-year career and gave a speech of her aspirations while wearing a wedding dress she produced herself.

“Six years came in a blink of the eye. Popteen was like school for me… each month, I became more and more comfortable in front of the camera where Popteen has taught me so many new things. I’ve grown into an adult here,” Kumicky explained teary-eyed. “Today, I’d like to thank everyone that was able to come see me. I think there’s a lot ahead of me in my future, but if I look back, I been through a lot and I feel good about my body and way of life now. In addition, I look forward to the day that I can meet you all again.”

The press noticed her wedding dress and questioned if she will be getting married soon. Her response, “Hm….I’ll leave that to your imagination.”

Kumicky was first snapped in Shibuya when she was 17 years old and has since made her way to the top of the industry. She been on the cover of Popteen 35 times (17 of them in a row). Since kicking off her modeling career, she has released several photo books, won awards, started up her own brand and even made her debut as an actress.

Her last appearance in the magazine will be the October 2014 issue, which will be released on September 1st.