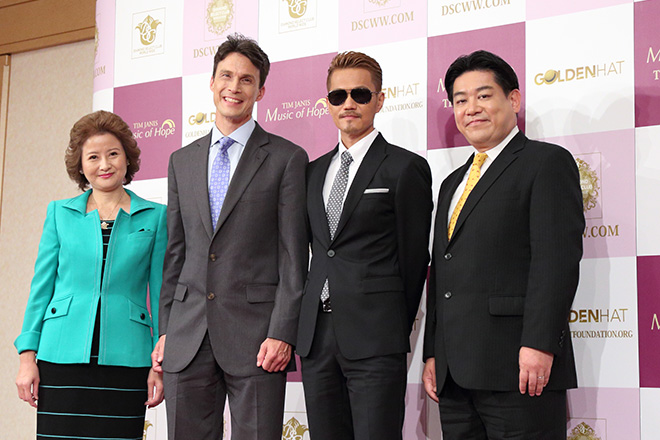 Today, BARKS has reported that EXILE ATSUSHI will be performing alongside Tim Janis at Carnegie Hall. It will be at the “Christmas Carol Concert”. It has been taking place every year on the first week of December since 2006. ATSUSHI is the first Japanese person to participate.

The concert is a charity event and all proceeds will be donated to a foundation. Their aim is to be able to fulfill dreams and wishes of children through the power of music. The collaborators this year would also like to build a bridge between Japan and the world, as well as help the children affected by the 2011 Tohoku disaster.

At the press conference, EXILE ATSUSHI, Tim Janis, Ogami Amy Toshiyo and Hata Yuichiro were present. Ogami is the representative director of Diamond Select Club Worldwide, while Hata is a member of the House of Councillors and a director of the Children’s Dream Fund, a non-profit organisation. These two are responsible for offering ATSUSHI a place in this wonderful concert.

ATSUSHI mentioned that he wants to to whatever he can to help those in need, and will reach them with his music. Tim is also looking forward to showing ATSUSHI’s talents and performance to this year’s audience. The two of them are working to create new songs that they will perform at the concert. They plan to perform 3 songs together.