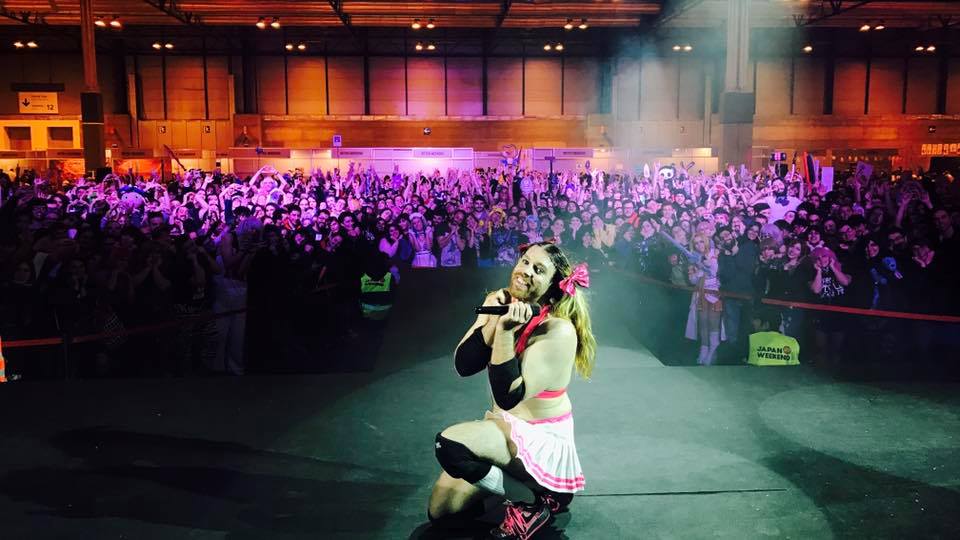 This past weekend, I had the pleasure to assist on behalf of ARAMA!JAPAN to Madrid Japan Weekend, one of the most important Japanese culture cons of Spain. The event was bustling with cosplayers, dance groups, illustrators, merchandise sellers, videogame lovers and much more. And what would be a Japanese cons without guest international stars to bring Japan extra closer? One of them was the Idol-Metal, Kawaii-Core superstar LADYBEARD, a true beast on the stage that left no-one indifferent, covering all your faves and knocking out all his haters. Today we are sharing a Live Report on the concert he gave on Saturday, and tomorrow we will share our report of the Q&A panel he held! Don’t forget to also check color-code‘s Live Report! 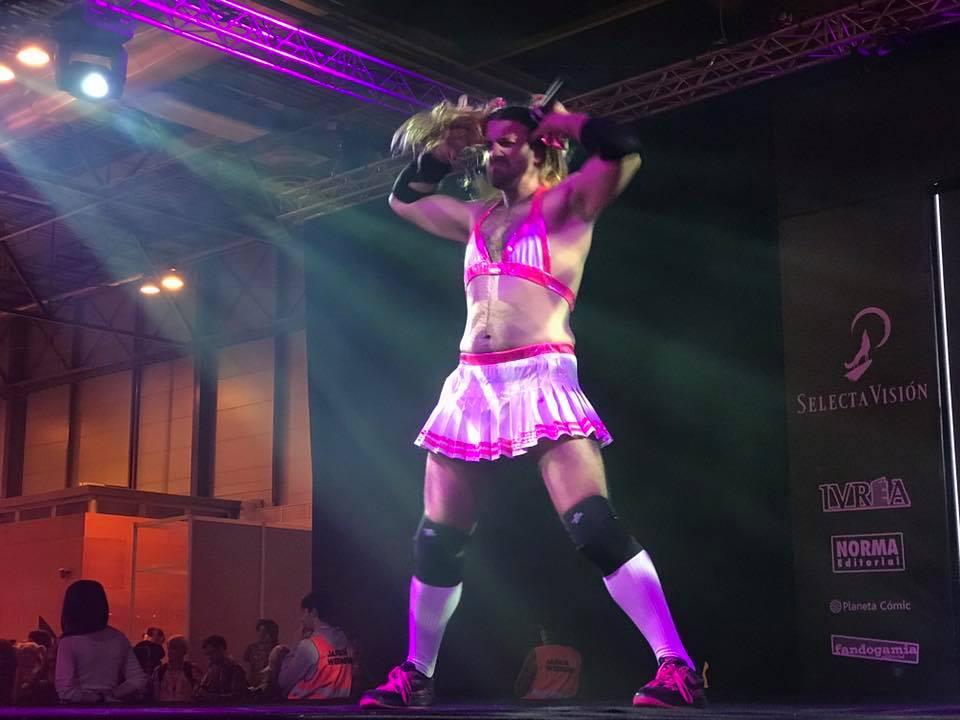 LADYBEARD‘s concert was humoriously scheduled just after the FINAL FANTASY – DISTANT WORLDS teaser concert, as the full orchestra is visiting Spain next April. The audience enjoyed the soothing and delicate Final Fantasy compositions sat on the ground, some even laid back onto their backpacks. This calm ambient was shattered when the Japan Weekend Madrid presenter appeared on the stage to mention a couple of things to the audience, refering to the cataclysm that was going to take over the con:

“Before the concert starts, please stand up as this concert is going to be quite energetic, but also please separe yourselves from the stage, as LADYBEARD’s concerts usually get a bit out of hand and we have to put some security fences surrounding the stage, just in case. Finally, LADYBEARD has asked us to tell you that he prefers you to enjoy his concert and leave mobiles and cameras away.”

For me, it seemed quite normal: leaving a bit of space between the stage itself and the crowd wasn’t that strange and was quite logical (the fact that color-code‘s concert had us literally touching the stage was what truly shocked me!), though the truth behind this decision was something different that we wouldn’t discover ’till a bit later into the show. After that announcement, the stage screen showed LADYBEARD’s logo and the crowd started to call for the superstar who, several minutes later, appeared on the stage introducing himself with the timeless, neutral-kawaii, “Watashi no namae wa LADYBEARD desu! Aaaahaha!” while running at full speed greeting fans, though without futher ado, he stopped and screamed “Let’s dance! ¡Música por favor! (Music, please)” and the iconic 80s bop “Valentine’s Kiss” came through. This time, it was quite different from the version he already recorded with Shiori Tomita: the cover was more akin to the Kokusho Sayuri‘s original version, though it didn’t leave out his frequent full metal parts. Following it, he then performed his cover of “Onegai! Cinderella” from THE [email protected]. This performance was remarkably good as the previous song had already broken the ice and the crowd was in the perfect mood for his kawaii-core, clapping loud and screaming their souls out: no wonder why, towards the end of the performance, he jumped down the stage and hugged a couple of fans! I’d probably choose this track as my close second favorite song from the whole concert, as the following one was crazy good. 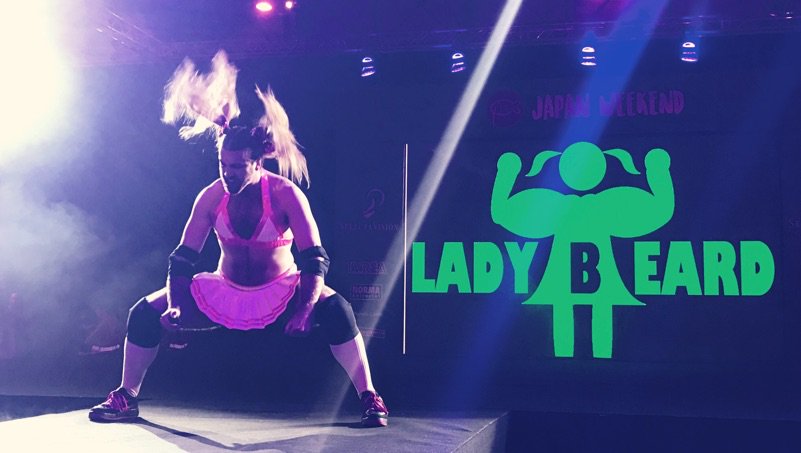 After these two killer tracks, LADYBEARD took a short break to introduce himself in Spanish and asked the audience to follow his three greats principles: Sing, Dance and Destroy. The already hyped audience couldn’t contain itself when he announced he was just about to debut a brand new original song on the stage for the first time ever, and even made LADYBEARD ask the sound techs “Raise the music up on the stage, they are very noisy, thank you!” before performing it. “LADYBEARD Airlines”, a sweet, electronic, metal, kawaii, insanely catchy track with an extremely tiring (and surely dizzy) dance routine, an omen warning us about the fact that LADYBEARD is far from ending, and new material has been already composed.

But then, something unexpected happened. One wrestler appeared from the back of the stage and, while LADYBEARD was thanking fans on the stage, he punched him on the back of his head, making him drop onto the stage. The strange invader, a Spanish wrestling champion called Pimp Ross, kicked him and raised him up on his arms to throw him onto the stage again before taking the mic. He then proceeded…

“Listen closely, LADYBEARD, you disgusting effeminated man.” *crowd booes* “Shut up, you geeks! Now it’s time for you to listen to me, you shitty geeks! What kind of shitty spectacle is this? People in Spain don’t want to see LADYBEARD! They want to see his previous group!” *the crowd angers and starts shouting out together ‘LADYBEARD’* “People want to see his previous group, and now I’m going to tell him that.” *he comes to LADYBEARD and grabs him by one of his ponytails* “Without LADYBABY, you are – worth – nothing!”

Then, Pimp Ross grabbed his other ponytail and started waving his head left and right, though LADYBEARD got to elbow him a couple of times before getting finally released from him. From that moment on, an epic wrestling fight ocurred. LADYBEARD got to perform a sick neck hold with his legs that threw Pimp Ross down the stage to the safe zone luckily secured with the safety fences. But the stage was a too little ring for such a battle, so Pimp Ross untied the fences and pushed the incredulous crowd back, as he was preparing to receive LADYBEARD’s jump attack from the stage. Unsurprisingly, Pimp Ross received the worst of the assault. Surrounded by the audience, LADYBEARD delivered him a couple of punches to the face before grabbing him by the neck and, creating a corridor splitting the crowd into two like Moses himself, taking him to the opposite point of the crowd: a videogame selling stand. Nevertheless, Pimp Ross got the advantage halfway there and smashed LADYBEARD’s head against the videogame boxes, before walking down back to the main stage while both hit each other.

The crowd was truly shocked given the fact that it was completely impossible to predict that the concert was going to end up with these two big men fighting over the past fate of LADYBABY, but that only made people more exhilarated about LADYBEARD. It was particularly remarkable when, after one truly strong puch the superstar gave to the villain, one fan close to him roared. LADYBEARD acknowledged his presence and hugged him, before going back to the baddie. Once they came back to the stage, Pimp Ross hit LADYBEARD roughly five times in the crotch, but he endured them easily: after the last one, it was Ross’ leg the only thing that was hurt. This all concluded in a final showdown were beautiful dodges and quick kicks (and one ponytail hit!) into the head awarded LADYBEARD victory. He then carried the defeated hater outside the stage and grabbed the mic. His first words after the tiresome battle? “¡Música, por favor!”.

With no delay, the famous sound of Kyary Pamyu Pamyu‘s “Tsukema Tsukeru” filled the stage and the cutest smile appeared again on LADYBEARD’s exhausted face. For the last segment of this song, he brought his nunchakus and performed with them, as it’s already typical of this performance. Following this track, he performed his truly original version of Sailor Moon‘s “Moonlight Densetsu”, so rearranged it was sometimes hard to recognize the original lyrics. Closing the concert, he dedicated a couple of words to the crowd: “Madrid, you guys are wonderful, you know, uhm, I’m not sure, but, I… I think I love you”. After those sweet words, he started to cover Utada Hikaru‘s “First Love”. His version kept the original arrangement until the end of the first chorus, showing the lovelier side of LADYBEARD. After this heartfelt declaration of love, and the heartfelt headbangs and death growls that followed, he quickly left the stage without almost waving goodbye.

But Madrid needed more LADYBEARD, and the crowd instinctively called for an encore. After a relatively short wait, the superstar that charmed the heart of every assistant took the stage again to say farewell one last time, this time covering Justin Bieber‘s “Baby”, and in its performance he even took the camera of one assistant and recorded himself, crafting one kind of memory this lucky boy won’t forget. This cover showed again what I think it’s the most amazing thing about LADYBEARD: He can take any track from your faves and transform it into one, naturally fitting, track of his own. His style might seem a bit “cringey” when you watch it from outside, and sometimes even repetitive; but in fact his performances are one kind of an experience capable of both making you laugh and wholeheartedly rock to the tracks. And all of this just after performing a wrestling act! LADYBEARD gives it all in the stage, and if you are willing to give him all you’ve got, the experience will be unmatched. LADYBEARD brought his personal world to Madrid and Madrid loved every part of it.