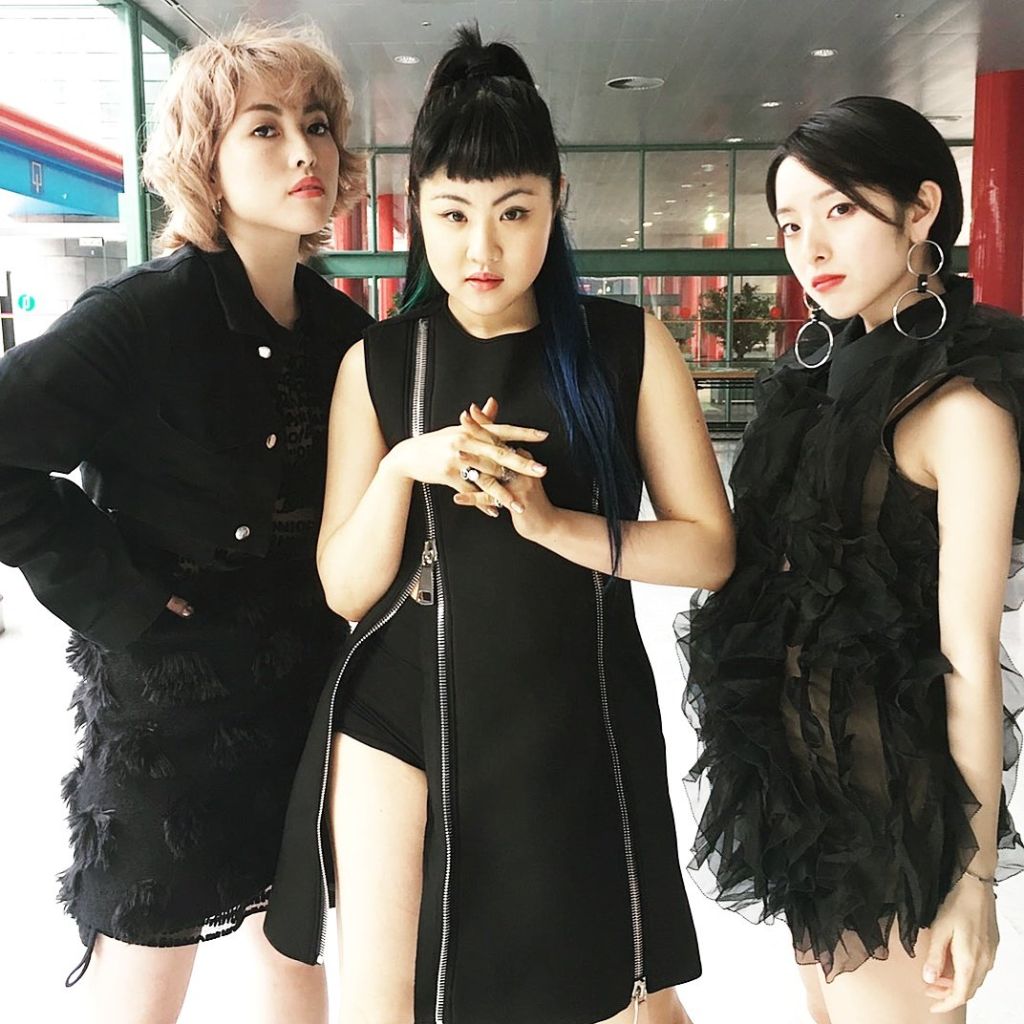 This past weekend, I had the pleasure to assist on behalf of ARAMA!JAPAN to Japan Weekend Madrid, one of the most important Japanese culture cons in Spain.

The event was bustling with cosplayers, dance groups, illustrators, merchandise sellers, videogame lovers and much more. And what would be a Japanese con without guest international stars to bring Japan extra closer? One of them was the electropop trio color-code, who brought class, style, fashion and lots of love to the event. Today we are sharing our report on the Q&A panel they held, and yesterday we shared our Live Report on the concerts they gave on both Saturday and Sunday! Don’t forget to also check LADYBEARD‘s Q&A!

As the Q&A was a public panel where anyone could ask questions, the topics got lost between questions. I’ve rearranged the order of some questions so it’s easier to jump to whatever you are interested the most!

What do you think about Spain?
Nanami: There are lots of kind people, the food is delicious… it’s an amazing place.
Marisa: In Japan, we believe Spain is the country of passion, and even though it’s true, there are also lots of shy people, and those ones are extremely cute!

What do you think about Spanish guys?
Nanami: They are really “cool”, but they also are really “cute”.
Marisa: The guys in general are really handsome, and cosplays look good on everyone! Cosplay doesn’t suit every guy in Japan, but in Spain it works for everyone!
Mako: They are my kind of guy: tall and handsome.

What were your expectations of Spain?
Mako: We didn’t have any prefixed expectations, though the kindness of Spanish people have surpassed anything we could have expected.

How old were you when you first realized you wanted to be singers?
Mako: Since elementary, 12 years old.
Nanami: I’ve been thinking about it since I was 13 years old.
Marisa: I don’t really remember… I think I realized I wanted to become an idol when I had no other option in my life than to become one.

What advise would you give to become an idol?
Marisa: I think it’s really important to be real, being true to yourself.
Mako: Lots of practice and force of will.

What made you keep going on in the toughest moments?
Nanami: I listen to our stronger songs and I get moved with them, so they inspire me.
Marisa: For me, it’s the opposite. In the toughest moments, when you can’t stop going down and down and it seems like there’s no way up, the best is to cry, cry and cry ’till I run out of tears. When I stop and think about it, I’m already doing something else and I’ve overcame it.

When it comes to learning a new song, what is more difficult for you: singing or dancing?
Nanami: In my case, as I’m the main choreographer, I find harder to get the song right.
Mako: For me the singing part is easier, but the choreography comes and goes up until you truly master it, so it’s harder for me.
Marisa: In the song you always have to express a certain feeling, and even though the dance also has this function, it’s easier than the singing. When it comes to vocals, you have to express the feeling with your voice, so you truly have to understand and feel that certain emotion to convey it, and maintain it strong throughout the song.

In your first single, “I LIKE DAT”, you chose to cover “Tamashii no Refrain”, a song from Evangelion. Who had the idea of covering that song?
Marisa: I love Tamashii no Refrain! We thought about remixing an anime song, and when we remembered Tamashii no Refrain we realized that transforming it into our “color-code” style wasn’t complex and it would rock. Now, we look back and we think that we made a really good choice.

When it comes to composing songs, from where do you draw inspiration?
Mako: The main inspiration for the songs are my feelings: depending on my feelings, I compose a certain type of lyrics and music.
Marisa & Nanami: Exactly.

How do fans impact in your life?
Mako: They give us goosebumps!
Nanami: They get moved with us and we get moved with them, even more than them.
Marisa: Just as it happened in our concerts here, the fact that going overseas and people getting so excited with us… it’s really beautiful, as we’re not used to this and we love these situations.

What feeling do you want to convey with the new single, “Re start”?
Nanami: I composed this song. At first, I wanted it to be mainly rap, so I didn’t think that much about the message but instead focused on the rhythm, the sound of the words… Even though, the song has a clear message: keep believing in you, don’t give up, keep pressing on.

What were your first impression of each other when you first met?
Marisa: For me, Nanami was really scary! My first thoughts when I saw Mako were “why is this woman wearing this kind of clothing?”
Mako: I also thought Nanami was scary! When I first saw Marisa, she seemed like a really serious person.
Nanami: In fact, Mako and I had one friend in common, though we had never met. We didn’t even knew we both were participating in Nicola’s “POP ICON PROJECT TOKYO”, so when we found out we were chosen I remembered her. When I first saw her, I thought she was a really strange person, something I still think today. Marisa was the opposite: at first she looked very mature and serious, though when I knew her I realized she was a 4-year old girl.

This question is for Mako. When you introduced yourself in 2014, you mentioned that one of your hobbies was “examining people’s aura”. How does that work?
Mako: This is a really tough question! It’s very difficult to explain, in fact I don’t even truly understand how am I able to do this. When I look closely at somebody, a light halo surrounds his silhouette, especially around the head, and it has different colours. Depending on the colours of that concrete aura, I understand the personality of people.

If you had the chance to sing with any other artist, who would choose?
Mako: It’s tough! If I had to choose somebody, it would be Beyoncé.
Nanami: ONE OK ROCK.
Marisa: Eeee! I have no idea! Well… actually, I’d love to collaborate with Sheena Ringo.

What’s your favorite dance style?
Marisa: Lately we have been dancing more and more vogue, and it’s my favorite.
Nanami & Mako: Yes, we agree.

What do you do on your free time?
Marisa: Whenever I have free time, I barely go out of home: I watch anime and films, play games, read books, sleep…
Mako: It depends on how am I feeling: when I want to be alone, I love drawing and having walks around. When I want to be accompanied, I love spending time with my family.
Nanami: I love watching videos on YouTube and glamming up to spend the day in the city without any special reason.

For Marisa: What are your favorite animes?
Marisa: Lately, I’ve been watching Osomatsu-san. I also like Ao no Exorcist, Bungou Stray Dogs, Shingeki no Kyojin (even though I still have to catch up with the storyline) and Re:zero. I’d love to cosplay something from Re:zero, or Mikasa from Shingeki no Kyojin. As for musical animes, I think THE [email protected] is a great anime.

What’s your favorite song?
Nanami: I’d say “STAR”. It’s the last song we perform at concerts, so our fans seem to be even more thrilled and they sing with us. I love seeing how everyone dances it.
Marisa: Even though we haven’t played it live yet, our newest single “Sakura Ame” is my favourite.
Mako: It’s so hard to choose! Lately, “Girls Talk” is the song that I’m feeling more like it. Its tone and its rhythm are really cool.

Would you like to try out a new kind of dance style?
Mako: I think it’d be quite difficult, but we would love to have poppier choreographies.
Marisa: Performing them live in a concert would be pretty difficult, though I’d love to dance jazz. Also, even though it’s not a dance, I’d love to add acrobatics to our performances, such as in the circus.