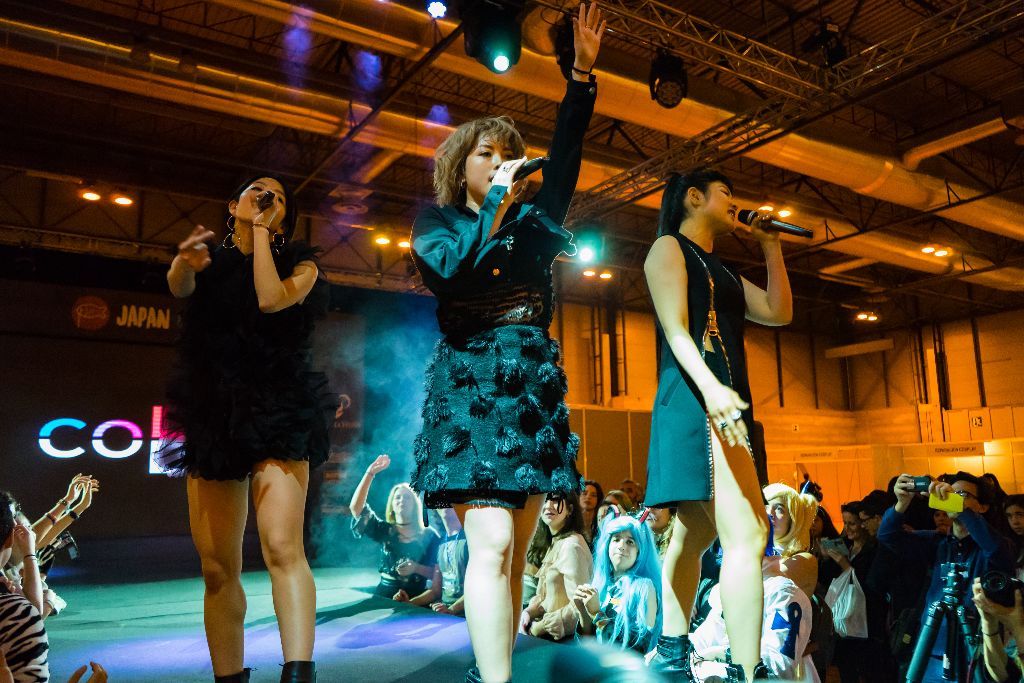 This past weekend, I had the pleasure to assist on behalf of ARAMA!JAPAN to Japan Weekend Madrid, one of the most important Japanese culture cons in Spain. The event was bustling with cosplayers, dance groups, illustrators, merchandise sellers, videogame lovers and much more. And what would be a Japanese con without guest international stars to bring Japan extra closer? One of them was the electropop trio color-code, who brought class, style, fashion and lots of love to the event. Today we are sharing a Live Report on the concerts they gave on both Saturday and Sunday, and tomorrow we will share our report of the Q&A panel they held! Don’t forget to also check LADYBEARD‘s Live Report! 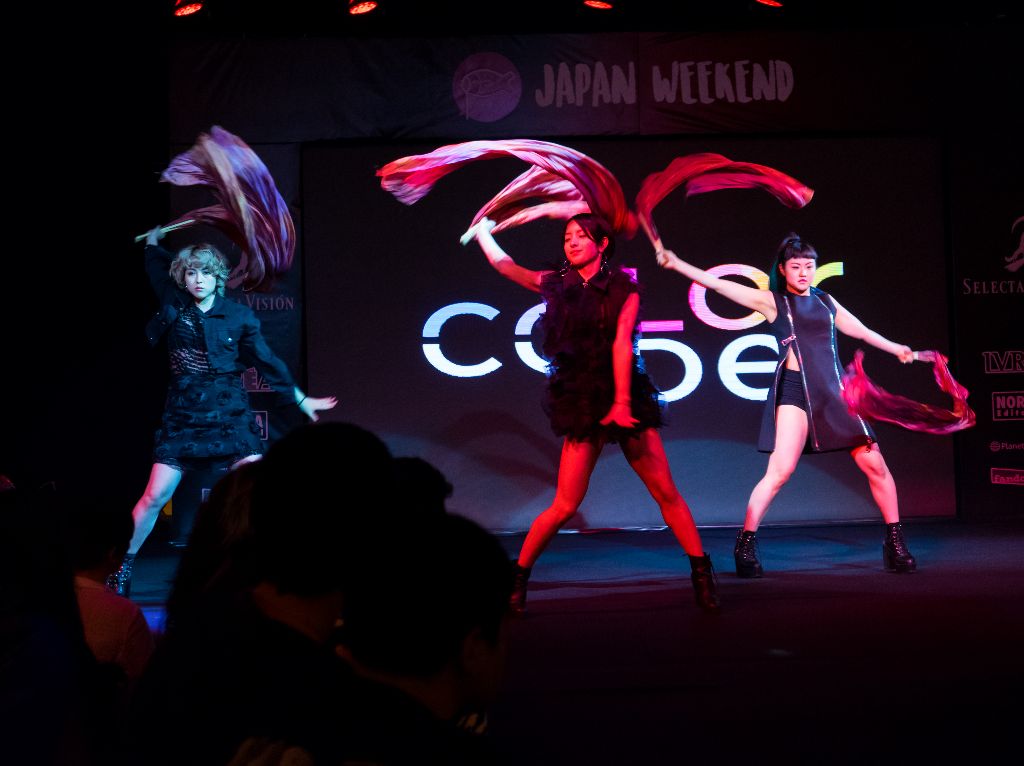 While the con was just starting and people were still waiting in a long (though relatively quick) queue to enter in the pavillion, the trio was already close to the stage talking to the staff and greeting fans. They also casually danced to the K-Pop hits that were being shown in the stage screen while waiting for their moment to rock the stage. After a while, they proceeded to the backstage and a staff member came out to tell a shy audience what was going to happen:

“color-code have told us that they want you to give all you got in the stage with them, so come as close as you can to the stage!”

The stage was a simple typical rectangle with a catwalk towards the crowd, and the public occupied all its surroundings. Following those instructions, an introductory trailer featuring footage from their last shooting at GINZA with “I LIKE DAT (DJ Nuckey Remix)” as the coupling song. When the trailer finished, the crowd roared in excitement and Nanami came out, hidden behind a fan with a long silk cloth attached to it. As soon as the song started to play, both Marisa and Mako entered the stage and began performing this brand new opening interlude incorporing the fans to their dance. Leaving no room for a sigh, as soon as it ended, their signature “I LIKE DAT” kicked in and people jumped in excitement.

They then performed three songs from their latest EP “Colorfull”: the cutesy “B.F.F.”, the hard “Girls Talk” and the poppy “POP STAR”. In every song, the girls communicated with the crowd, sending personal greetings to several fans and cameras and asking for hand movements. The level of sexyness the group brought to the stage with “Girls Talk” was truly memorable, as they coordinately moved their hips as one. Another remarkable moment was the short showcase of Marisa‘s flexibility in the drop of “POP STAR”, hyping the crowd to amazing levels. After those three already familiar songs, they debuted a new digital single, “Re start”. There were loads of amazing moments throughout the concert, though I’d say “Re start” could be the best moment of it. Even when the song wasn’t groundbreaking, it was a really likeable melody, but the best part of it was Marisa‘s voice during the chorus! Her vocal range was outstanding and truly made me shiver. The last track they played before their first MC was their vogue interlude, a short but impressive dance routine that really resonated with the fans. 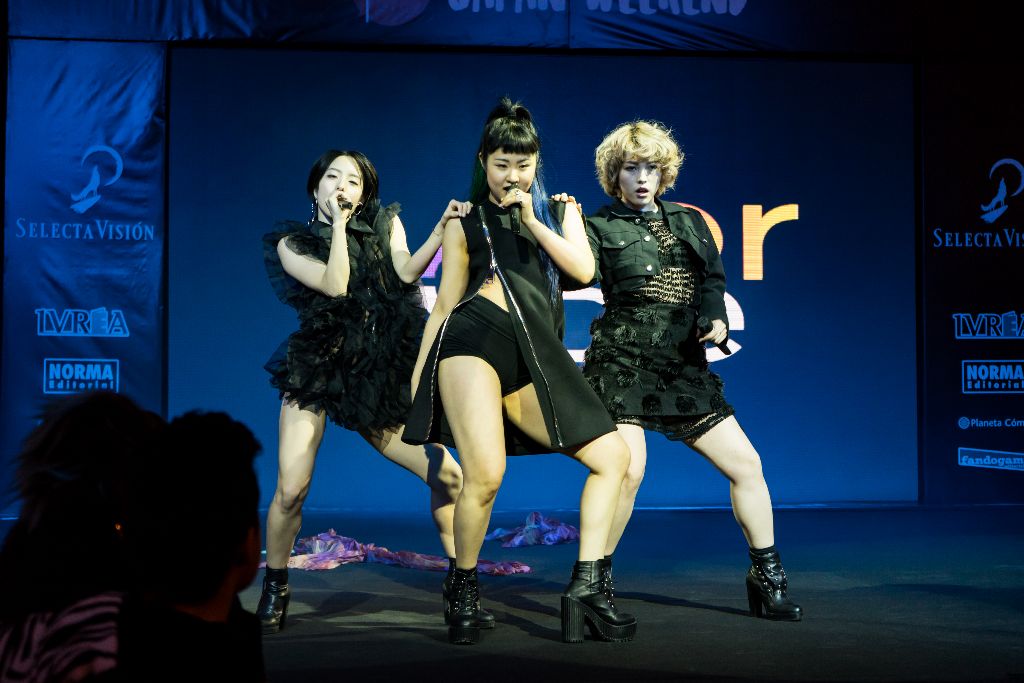 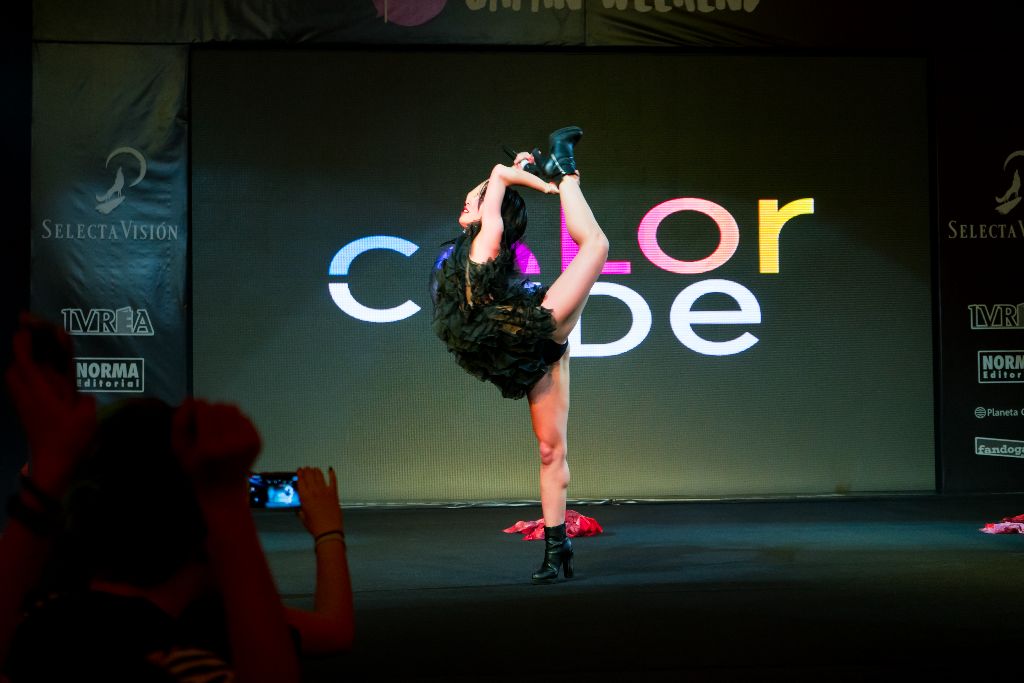 During the MC, the girls introduced themselves in Spanish, explained the crowd their signing stand at the con and announced that “Re start” was already available in iTunes. Finishing the MC, they called to the stage a Spanish dance group called “RBN Project” famous for their JPop dance covers (up to the point of even being finalist in the last Perfume International Dance Contest!) who recently won a Spanish dance contest covering color-code’s “I LIKE DAT” plus its vogue interlude. This performance got the attention of the trio up to the point of letting them dance with them in the stage while they sang. It was a truly emotive moment, even for the audience, which cheered the three dancers as if they were truly professionals.

After the MC, they visited their older songs, such as “Break My Heart”, “Hands UP!” and “Break Our Love”. After them they performed the first two tracks from “Colorfull” as a wrapping up, “Over The Dream” and “Star”. The latter, thanks to its energetic and accessible drop, hyped the crowd as if it were the first song they performed, giving full energy as they jumped and sang. Finally, the three girls said goodbye and proceeded to left the stage, but as Mako was about to step off, something happened. One of Japan Weekend Madrid Staff stopped her with a piece of cake in his hand: Mako’s birthday was just the day before (February 10th). The whole audience sang her Happy Birthday along Nanami and Marisa. The shock and emotion in her face was present throughout these seconds as she muttered longs “eeeeee…”. After blowing the candle, she proceeded to the front part of the stage, fell to her knees and, clearly moved by the detail, she bowed. After that, she clapped hands with those close to the catwalk and finally left the stage. 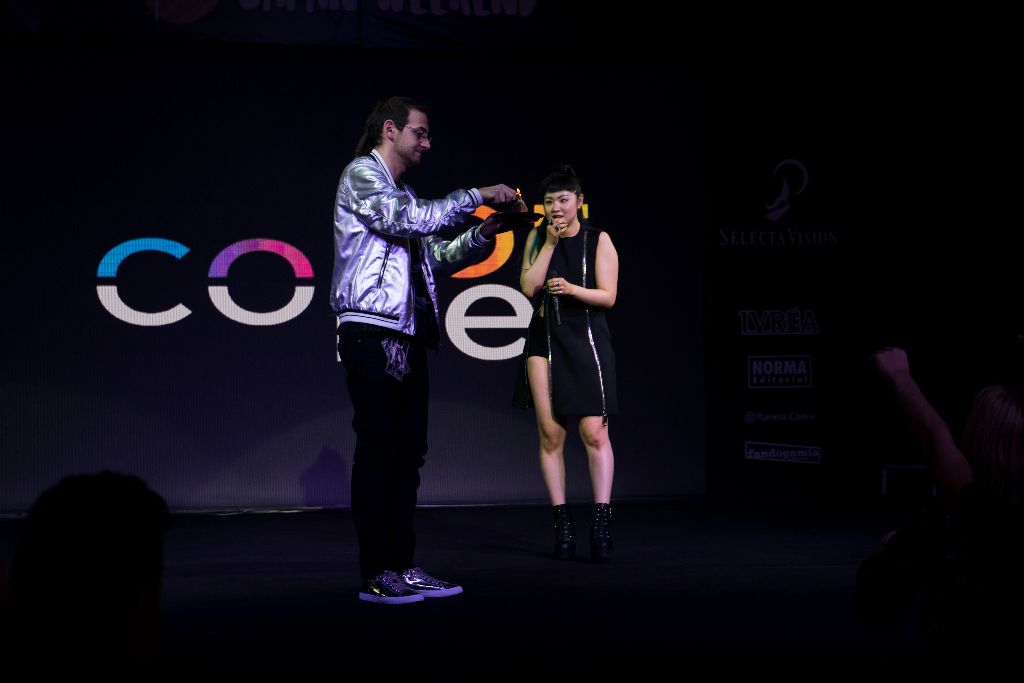 昨日のライブの最後にお誕生日をお祝いしてもらいました😢サプライズでした。。本当に最高だな😭✨ありがとう！！！ this is one of great memory of my birthday..I'll never forget! I was so moved that many people celebrated my birthday.. it was very good surprise😭 my feeling is ”amazing” ✨ Thank you very much！！ Gracias❤️Te quiero❤️ #clc #colorcode #hbd #happy #love #live #thankyou #ありがとう

The concert really shone thanks to the amazing level of closeness the girls had with the crowd. And even when most of the crowd was new to them, the connection was truly genuine. The frequent winks and details they gave to the audience, the constant use of the catwalk, their introductions in Spanish and this final thank you Mako gave to the crowd were all the key features that made this concert memorable: for the roughly one hour of the concert, a magic and precious atmosphere was created in which it seemed we all were long time friends of the trio. And after this performance, most of the audience is probably going to become long time fans of Nanami, Marisa and Mako.