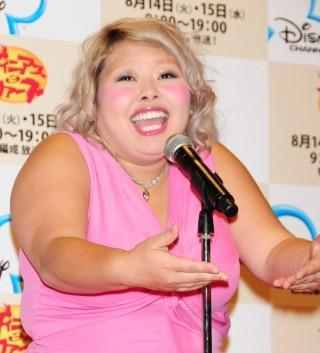 On the 22nd, commedienne Watanabe Naomi (26) took part in an event commemorating the release of the new product, Lipton Fruit Tea. At the event, she recollected her three months spent studying abroad in New York, which began on May 25.

Watanabe, who represents chubbier girls said that she came to realize that she was quite slim, revealing, “When I went over there, there were people 100 times bigger than me rolling around. My dance teacher even told me ‘You’re not fat. You’re very healthy.’ When I was told that I thought I should have more confidence.”

In addition, she admitted that right after she went to study abroad, “I didn’t know where the restaurants were, so I became skinny. I’m back to being my original weight of 98 kilos, but at my thinnest I was 93” and gained some laughs.

Speaking of how her English improved she said “I got to the level of a 2nd year middle schooler. Up until then, I could only say yes and no.” When someone requested her to promote the tea in English, Watanabe said “Thees tee izu so guddo. Zehi nondekudasai [Please drink it],”* switching back to Japanese halfway.

When she returned to Japan, she promptly prepared souvenirs for her celebrity friends. As for the things she bought: “For the men I got sexy underwear, and for the women, cute things.” She also bought SM goods for Heisei Nobushi Kobushi’s (famous comedy duo) Yoshimura Takashi.

At the event she was surrounded by 4 ikemen including Chiba Yudai (25), Nomura Shuhei (20), Miura Ryosuke (27), and the culinary researcher Terada Shinjiro (31), making it “the best event ever.” 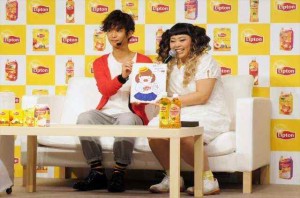 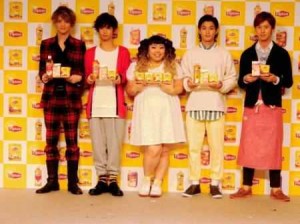 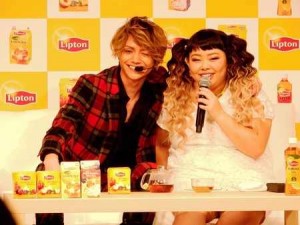 *Note: I wrote it like this because in the original article the English part is written in katakana, indicating she had a bad accent.