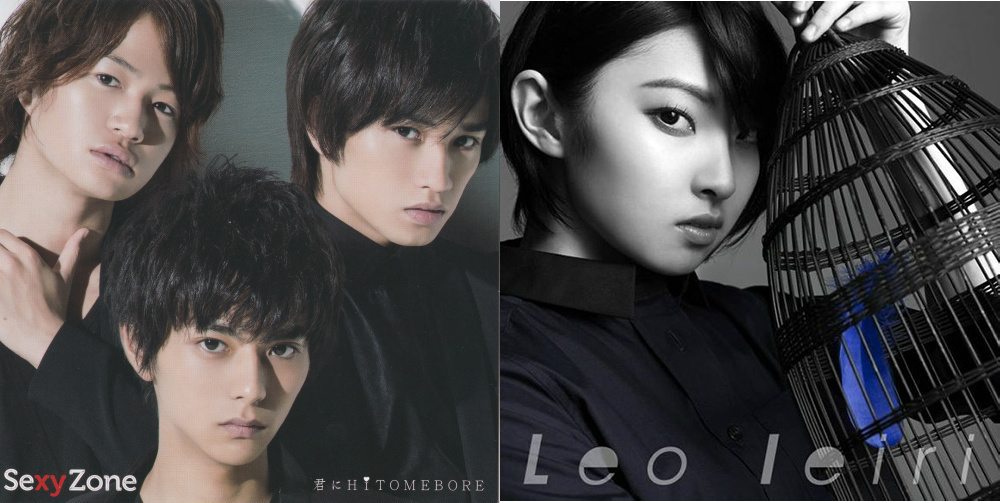 Hello AramaJapan readers and welcome to this week’s installment of #1 Song Review! Last week, Namie Amuro came in first yet again, beating Che’Nelle for the second time as well as newcomers KinKi Kids. This week though, we have 2 new acts battling it out! Find out what various staff members thought of the songs that topped the physical and digital charts this week and share your thoughts on them too!

Ronald: First thing, I’m not annoyed as much by the vocals as I have been on previous Sexy Zone songs. Don’t take this as an endorsement though. The really nasal one seems to have been neutralized in some way. This song does seem like an attempt to update their sound in a way. It’s a bit fresher for them. But that being said, it’s not really that fresh in general. There still quite a bit of cheese here, that guitar solo being one of the biggest pieces. 3.5/10

eyeless: If I have to review a music, I usually listen to instruments it uses, the progression of the song and vocal. I don’t think this song have anything special, it’s a basic pop. I only listen one time and I think it’s enough. 5/10

Ryusenkai: As per usual: [insert “idols are not my thing” spiel here]. Anyway, I can’t help but feel that “Kimi ni HITOMEBORE” is a song that is trying way too hard to be cool (the music video is not helping dissuade me of this opinion). Yet despite that, they’ve still stuck with one of the fairly typical choral melodies that I’ve heard Johnny’s use in the past. The instrumental for this track comes off as somewhat strange, since other than the consistent bass in the background, it sounds really segmented, with the connecting bits more than a bit awkward. This isn’t to mention that the segments themselves all sound like I’ve heard them somewhere before and never really branch out to become anything more than innocuous. The vocals are… not the worst I’ve heard from a Johnny’s group, but there’s nothing here that’s really making me want to praise their technique either. Can’t find a translation of the lyrics, but what I can pick up isn’t making me think that “Kimi ni HITOMEBORE” is particularly inspiring in that area either. As a final criticism, I don’t think that this song really needed to be 5 minutes long, but I suppose that that’s a particularly subjective judgement. Overall, I suppose I could say that I’m… unimpressed with this? “Kimi ni HITOMEBORE” is just kind of bland and doesn’t really tickle my interest at all. 2.5/10

Ronald: Leo Ieiri is but one of a number of young women who have emerged in the past few years to continue the tradition of female singer-songwriters. It’s a particularly interesting time to do this because the image of young women right now in the industry is largely one of having no artistic control. So for some young women to still be coming out and doing their own thing is a great contrast. One thing that bothers me about these young women though is that I can’t seem to separate them from their influences. Leo Ieiri went to the same music school in Fukuoka as YUI and ayaka and I can hear it. I’m not saying she’s copying them, but I can see an influence. Like when I listen to this song, I hear influences. I’m not saying this song is bad, it’s quite pleasant actually. I like the different vocal dynamics going on in the song. I like the how the instrumental changes at times. I just wish I could see more of Leo. I would like her to forge more of her own path rather than traveling one that’s already been paved and well tread. 6/10

eyeless: I always think Leo Ieiri is a really great singer, especially live, her vocal is 10/10. The song have real instruments, nothing too technical but well done. My problem with this song is how it progress, maybe I’m not really into ballad but it’s a bit bland for me. Overall a nice song. 7/10

Ryusenkai: All right, before I start my review of this song proper, I am going to compliment its music video, since I actually really like the artistic direction that they went with this one. Now then, I actually have a bit of a soft spot for Ieiri Leo’s music even if I think that she doesn’t do anything particularly groundbreaking and could really use some help in putting together stronger albums. “Silly” is one of her more energetic ballads that tries to differentiate itself from the bunch by adding a bit more drama to the overall sound of the song. To her credit, it kind of works, since the contrast between the kind of whispered verses and the gradually increasing energy of the chorus (before fading out once again) reminds me just a bit of Akai Koen’s “Dry Flower” (not nearly as dramatic though), which is a song that I looked very favorably upon. I think that Leo’s voice has a particularly distinctive and attention-grabbing tone that serves her very well in what she’s attempting to do here, though even through the studio recording you can tell that she needs to work just a bit on her breathing. The instrumental is pleasant, however… those guitar melodies really are very safe and typical when it comes to this type of song, and I would have preferred a few more risks be taken there (it really can pay off). Silly’s lyrics are interesting, since while I don’t doubt that their sentiment has been expressed before, I can buy their delivery coming from Leo, which is something that a lot of songs don’t often consider; so, while they’re not necessarily well written, believability does matter in its own way. On the whole, “Silly” is an enjoyable, if a little typical experience, and while I’ll praise it for trying and succeeding in certain areas, I’m still waiting for Ieiri Leo to release something that’ll blow me away. Still, more than worthy to be Pick of the Week material. 6/10