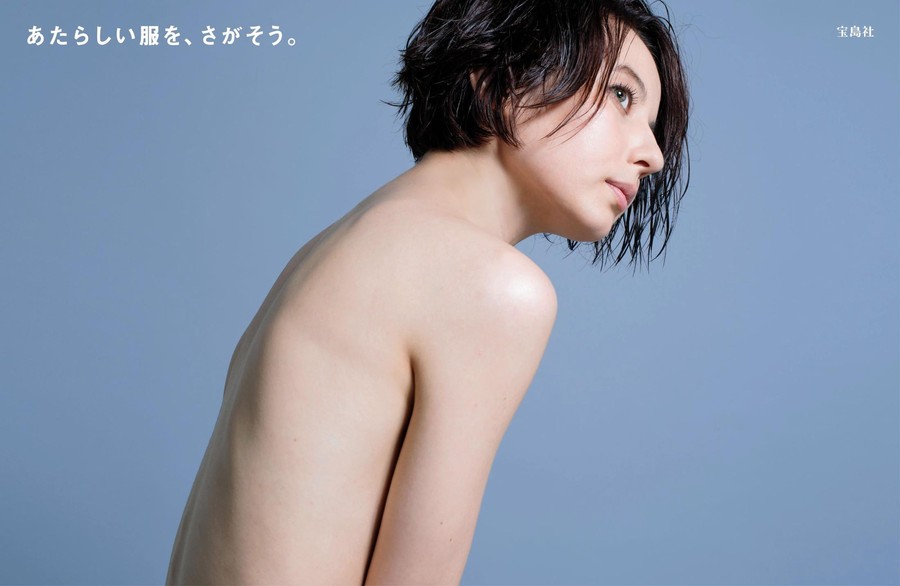 Published in today’s morning edition of Nihon Keizai Shimbun, singer-talent Becky is featured in a full-page full-color advertisement butt naked. Or rather, back naked.

The shoot took a minimal approach: no branding, simple background, natural makeup and lighting, freshly cut hair and some (very) minimal styling. She’s naked. It’s just a photo of her back and shoulder with her looking away from the camera. And much to my confusion, it has been billed as “shocking” according to the news sources I’ve been looking at. But…where?

In a fax to Takarajimasha, a Japanese publishing company known for publishing fashion magazines, the shoot was conducted with a homey atmosphere on a terrace, with classical music playing and minimal staff behind the scenes. It was created by the agency behind this beautiful ad with Kirin Kiki, everyone’s favorite Japanese screen grandmother, which earned them this year’s Yomiuri Advertising Award.

“For the sake of a beautiful advertisement, the consultants from the production team decided we’d cut my hair,” she wrote on her Instagram. “I’m sincerely grateful for this experience.“

Becky and the at-the-time-secretly-married (to a woman who wasn’t Becky) Kawatani Enon brought us this year’s first major scandals with their mutual affair. It forced Becky into a five month hiatus away from the spotlight, and to this day, her entertainment activities have yet to return to normal. Despite his divorce, Enon has continued to go on with his business as if nothing has happened, and was even recently photographed with his new 19-year-old girlfriend, leaving a bad taste with some internet users that believe Becky is not the only one at blame here and deserves justice.

They have a point though. Recently voted #1 in a ranking of have the worst luck with men, why is Becky the only one affected by this affair 9 months later?

But it is what it is. What do we think of her haircut? Do we think this move will improve her reputation?