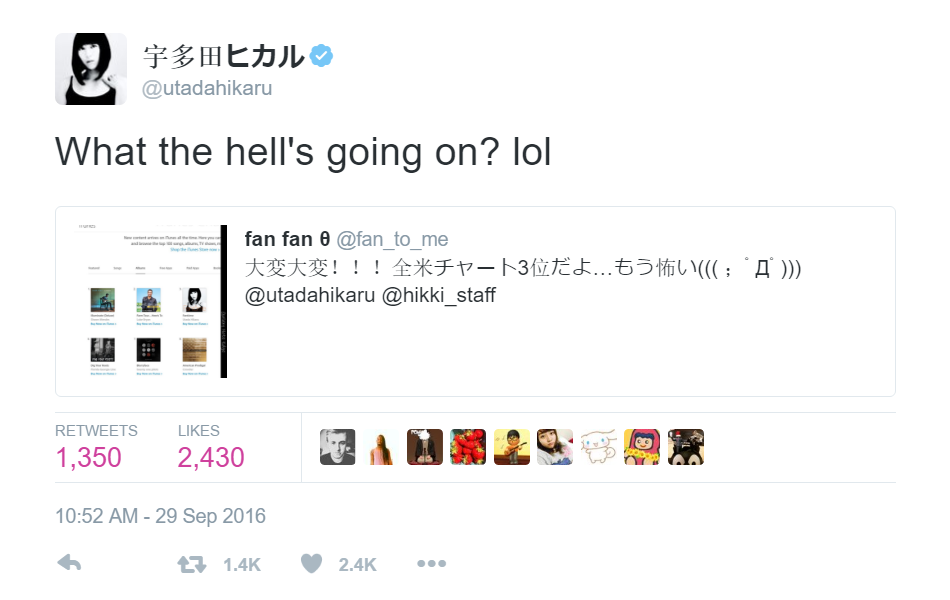 It has been two days since the official release of Utada Hikaru‘s latest album Fantôme, and like fans, the singer-songwriter herself is surprised at how well it has been received worldwide.

At the time of writing this, the album currently charting at #1 in 6 countries (including Finland…?), 8 countries in the top 10, and charting in a total of 28 countries worldwide on iTunes. Which isn’t bad at all for a Japanese-language album that isn’t being promoted outside of East Asia.

Half her tweets the past few days have just been her confused about the fact she has been charting outside of Asia. As time progressed, the tweets got more and more confused; from “what does this mean?” to “what the hell?” when she saw it went #3 in the US.

The question is, where were y’all during the This Is The One era?

What the hell's going on? lol https://t.co/fTnHKkk8ka

Her 2004 English-language album EXODUS broke Oricon records in Japan for having the highest sales for a foreign album in its first week debuting at #1. EXODUS sold 1,074,000 units in Japan, and charted for 20 weeks and became the #6 album of 2004. But in the US, the album only reached #160 on the US Billboard Hot 200 Albums Chart, making her one of the few Japanese artists to chart on the U.S. Billboard’s Top 100, and the first one to do so over two decades. The album only sold 55,000 copies in its intended market.

Her most recent English-language album This Is the One was released in 2009 and only made it to #18 on the iTunes General Albums ranking. And despite how low that was for the queen of sales in Japan, at the time, she was the first Japanese artist to chart that well in the US. Utada’s This Is the One ranked at #69 on the U.S. Billboard in 2009.

In Japan, Fantôme went directly to #1 on Oricon, iTunes and Recochoku. In two days, the album has sold 137,000 copies on the physical album charts, with a sales difference of less than 2,000 units against media-pitted rivals EXILE, who released a best album a day prior and are promoting multiple purchases with three CD editions and bonus purchase incentives.

It’s true Utada Hikaru has not had a huge, full-length album release since digital music sales became huge. Until now, there really wasn’t a quantifiable way for her to gauge her celebrity worldwide, especially after the commercial failures of her two English-language albums following her Japanese debut. This is all new to Hikki, and it’s cute.

Fantôme is definitely doing well, but with the mess that is the Japanese music charts, we won’t see aggregate sales numbers until RIAJ collates the digital sales data.

In the meantime, give us that world tour!