This past May 25th, AKB48 members Iriyama Anna, Kawaei Rina, as well as a staff member were injured during a handshake event. The attacker used a long saw-like weapon against them. Due to this, their record label King Records has stated that they will be taking proper measures to prevent a similar incident from happening. Participants will have to go through bag searches and metal detectors. Any food and drink will have to be consumed in front of staff. Bags will be limited to 1 per person and must be left in a separate area during handshakes.

According to Sanspo and Oricon, Iriyama Anna made a surprise appearance the theatre on June 30th. This is the first time she has appeared in front of fans. While she did have a cast on her right hand, she greeted everyone with a bright smile. Her fellow teammates welcomed her warmly and asked fans to keep supporting Iriyama and Kawaei, who has not yet returned.

Iriyama’s speech, details on the next handshake event and which members are not attending, can be read below. 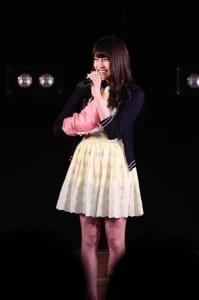 At the beginning of the show, Iriyama relayed a positive message to members and fans:

“Everyone, I’m very sorry for worrying you. I wanted to show you all that I’m doing well as soon as I could, so I took a little time to do so before today’s show. Even when I was always at home by myself, all of your voices were my support. I think that a little more time will be needed before I can dance perfectly. But, there is a place right here that I can return to, and there are many people that are waiting for me. I will start with what I can do, and start advancing little by little without rushing myself.”

Their next handshake event, on July 5th, will take place 41 days after their last one.

The official blog also announced that 6 members will not attend. AKB48’s Iriyama Anna and Kawaei Rina will be resting due to their injuries, and Minegishi Minami will be receiving medical treatment for a cyst in her kidney. NMB48‘s Miura Arisa will be focusing on studies, while Yogi Keira and SKE48‘s kenkyuusei Sora Miyuka will not attend due to their graduations from their respective groups.