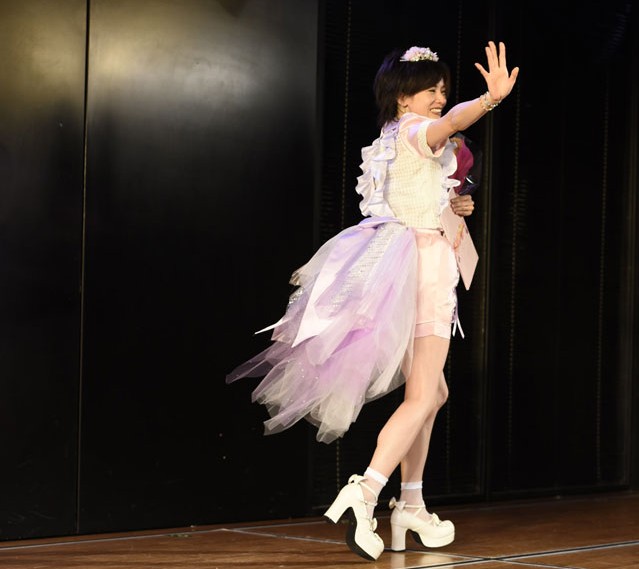 Back in April, top idol group AKB48 added 37-year-old (at the time) mother of two Mariko Tsukamoto as part of their crossover campaign with Japanese snack brand Glico. She beat out over 5,000 applicants including former Morning Musume member Sayaka Ichii, an Atsuko Maeda impersonator and an 82-year old woman.

Today Mariko, or Mariri as her fellow members called her, has graduated from the group at the AKB48 theater in Akihabara, Tokyo during Team 4’s performance. She performed Mariko Shinoda’s ‘Ue Kara Mariko’ and declared after her four month stay in the group, “Mariri is going to return to being a normal mom for now.”

On stage all the Team 4 girls, of whom she has performed with since her theater debut, told her she could come back whenever she wanted and thanked her for the good times they spent together .

During her time in the group, she was referred to as “AKB’s mother” but was expected to carry out all the same activities, such as theater shows, concerts, TV appearances, handshake events, etc. She even took part as the center for a coupling song for Papico entitled ‘Oshiete Mommy’ on the group’s latest single.