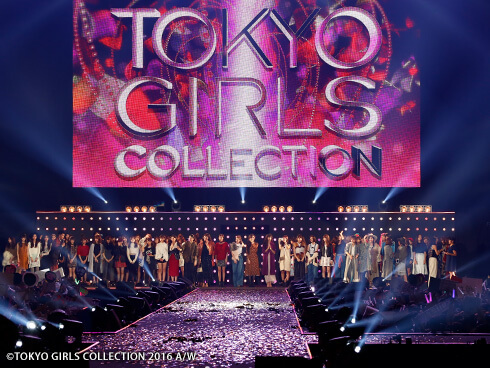 On September 3rd, GirlsWalker had completed their 23rd Tokyo Girls Collection fashion show. A staple on the calendar for many fashion addicts, the event was to showcase what offerings Shibuya109 brands had for Autumn/Winter 2016. Models walked, artists performed and MCs tried their best to entertain the crowd in between those times. All through this I was watching and critiquing; now I’m here to share my findings with you. Get ready to read about the beautiful and just plain the ugly about Tokyo Girls Collection A/W 2016. Oh, by the way the “Love Me” in the title isn’t a cry for help; its the theme of the show. 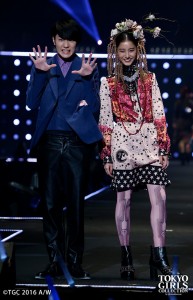 What is fashionable is in the eye of the beholder. In total there were 20 brands shown; 16 that were scheduled and 4 that were special stages. One particular stage that spoke to me was the TGC Special Collection 2. Though I am used to seeing vintage fashion and I wish that flower crowns would just go away, both of these things were paired in such a fresh way that I couldn’t help but fall in love with them. There was a mixing of not only patterns, but fabrics. Who would’ve thought to put expensive tweed with a simple jersey cotton dress? Accessories were chunky and layered; each could hold it’s own, but not dominate the other. Instead of the loud, cheap looking festival flower crowns I’m so used to seeing, the colors were muted; the silhouettes were bold. When you read about these things separately, that makes think that’s the way they should stay; separate. But looking at them all together it somehow works. 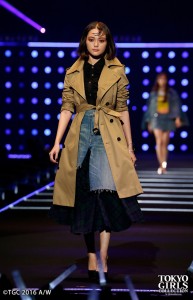 When it comes to TGC, I can’t stress enough to those interested to not miss the special collections. While not as powerful as the 2nd special collection,  TGC Special Collection 1 was still a joy to behold; by giving us their take on a sophisticated version of British-punk. Even though plaid and denim are considered to be fabric used for casual/informal settings, with a little prep and planning it can be something modern and mature. 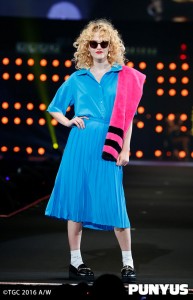 One thing that shocked me was how much I liked PUNYUS‘ collection. The creation of comedienne Naomi Watanabe, PUNYUS‘ clothing sizes expand into plus size range. In the past, while trying to give everyone the opportunity to be stylish and on trend, it usually misses the mark and makes its wearer look a bit doubty.  But it seem Miss Watanabe has got her footing down, because in this collection that sort of thing was no where to be seen. Though most Autumn collections use darker/subdued palettes, the bright colors used in the collection were not out of place and welcomed. The shopped has also teamed up with the creator of Garfield the cat, so expect to see him and his girlfriend Arlene on many products. A few bits of criticism. I am well aware that Naomi is known as the “Japanese Beyonce“; that’s her thing. But it’s a bit that I am getting exhausted by. Not going to lie, she gave great energy during her segment and she’s an incredible dancer; but its time to move on. Next are the models. The things that Naomi is known for are creating the plus-size fashion magazine LaFarfa, the creation of the plus-size friendly brand PUNYUS and for being plus-sized herself. I’m just a little miffed that she didn’t use some of the LaFarfa models on the runway. Don’t get rid of the thinner models, leave some there. Just try to include the people you’re saying you represent. 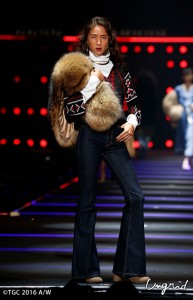 If you want to find a collection that used trends without going overboard, look no further than Ungrid‘s stage. Earlier this year TGC put out a list of what would be some of the it items for A/W 2016. Some collections used none of them; others chose one and used it to death. Ungrid was able to incorporate all of the trends and blend them to make them work. They understood that you have your basic outfit and then you need an eye catching piece to have it pop. Bravo! 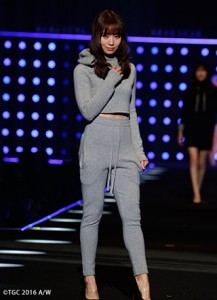 A simple but memorable stage was given to us by BeachMe. This was not one of the stages on the schedule that GirlsWalker had put on their webpage. I was surprised at how much I loved this stage (can’t lie, part of it was due to Maiyan). It’s always fantastic to see good quality knitwear. After the show I went looking to where I can acquire them or just even learn about them. Well, they do have a website (and SNS) but there is no information about them what-so-ever; except that they’re a cashmere knitwear company. So thank-you for keeping me awake for the next few nights trying to find you, mysterious BeachMe!

The Ugly (in my opinion) 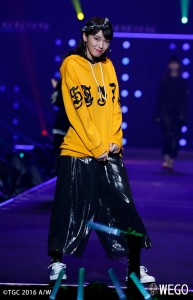 Here giving us what they consider “urban” is WEGO. For me WEGO is like a very expensive version of Forever21. There are a few nice things there, but most of it not so much. Mixing fabrics are a big deal this year and they did try to execute that method. And they failed. It also looks like they tried to hide it making most of their collection black; because black matches with everything (or something like that). Speaking of fabrics, WEGO did choose some interesting ones. If you look at the first picture above this paragraph you’ll see one of them. When this model was walking down the runway I couldn’t tell if her pants were a trash bag or not. Along with the other missteps in styling, you can tell that WEGO isn’t really a life style brand like the others in the show try to be; but just a peddler of this moment’s flavor. 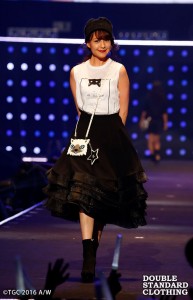 For the most uninspired inspired collection is Double Standard Clothing. Under the theme of ‘Cats Whiskers‘, the models strutted down the catwalk wearing clothing that would only be sold in the early 2000s at your local low end department store. Trying to distract the audience from the disappointment before them, the models would play with their handbags (that were a shaped like cat heads) while pretending they had claws. Part of did wish the models did have claws so that they could scratch my eyes out. I’m all for good accessories and having those be the focal point, but I’m not here for laziness.

Every other collection that isn’t mentioned here falls somewhere in between. Either they weren’t impressive at all or not impressive enough to warrant a paragraph in this unknown writer’s post. Also, I’m pretty sure GirlsWalker would try to shut us down if we gave away every bit of information and picture of the event. So I encourage you to visit their special report page (here) to see all the pictures they have to offer. I also encourage you to share your thoughts of the show down below in the comments section. Tokyo Girls Collection has kicked off Japan’s fashion season and we look forward to discussing upcoming future events with you on Arama!Japan.