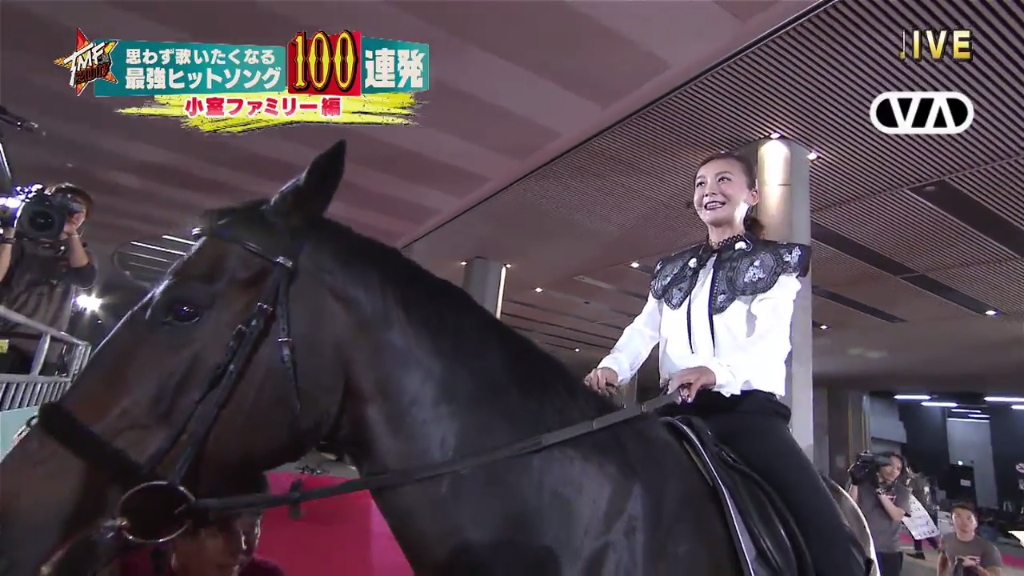 Held on June 28, “Tele Tokyo Music Fest 2017” provided nearly four hours of entertainment from a plethora of artists, but one specific segment has stood out to the public.

Members of the “Komuro Family” of artists, including the Testuya Komura-produced acts TRF, Tomomi Kahara and globe, gathered to perform their representative songs in a medley format.

In place of globe’s KEIKO, they tapped SPEED singer Hiroko Shimabukuro to sing in her place, as Keiko who has been unable to perform since she was hospitalized and diagnosed with a subarachnoid hemorrhage back in 2011 (though we know that it’s because she’s too busy tweeting “goodnight” every night on Twitter, but that’s a different story).

Overall, we bopped and we stanned, but the segment provided us with a career-defining performance from the legacy artist Kahara: a horseback production of her 1996 smash hit “save your dream“. Weaving in and out of cement columns on a red carpet stage, Kahara commanded the crowd of AKB48 and Nogizaka46 members with her equestrian skills and effortlessly hit the plethora of notes the song requires. I ask, when will your faves?

As previously reported, Kahara shared that she got back into horseback riding following her breakup with the producer that gave her a platform as a singer, Tetsuya Komuro, of whom she admits she still struggles to get over to this day.

Kahara has been into horseback riding as hobby since the age of 3. When she was in high school, she won 4th place at the 47th National Sports Festival with impressive scores.

Despite 20 years of absence from competing, in 2016 she won the Japanese equestrian event championship Japan Open with the horse Carry Susan. In March of this year, she participated in the International Equestrian Convention in Kakegawa after purchasing the daughter of Carry Susan the previous month.

I reached out to my horse-girl friend Claire Young to provide some insight into the skill behind this performance, who funnily enough was on her way to buy a horse when I contacted her.

“There’s some lovely trotting in there,” Claire commented, having competitively ridden horses for 20 years.”Very nice horse.“

Check out the performance below that combines the singer’s life-long passions of horses and singing, including the inspiring English-language lyrics:

In the future, Kahara will participate at the all-Japanese Handicap Equestrian Event in September.