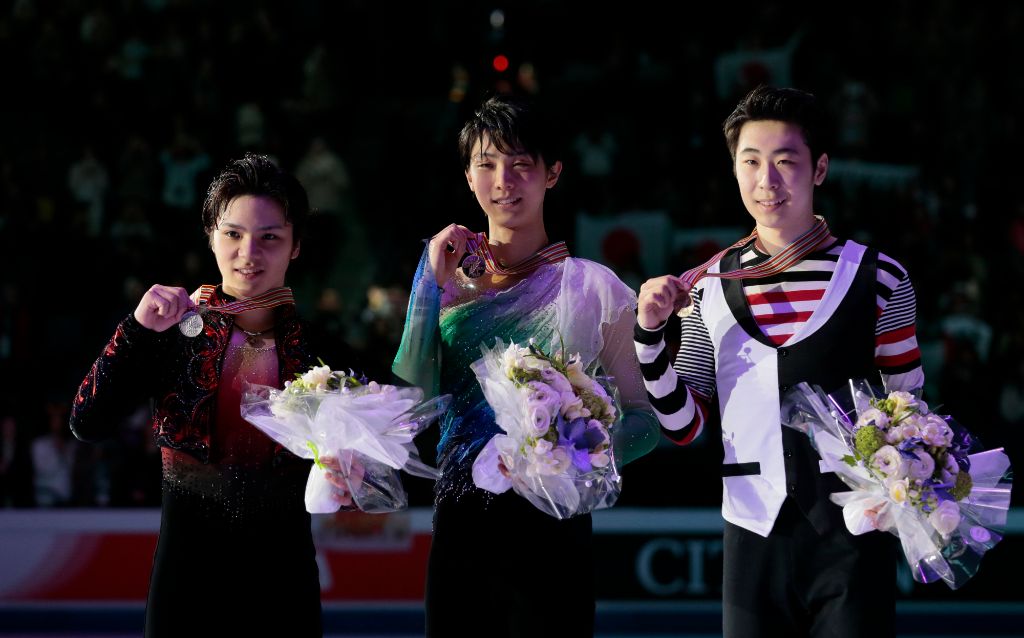 From March 29 – April 2, this year’s World Figure Skating Championships took place in Helsinki, Finland. Japan had two medalists at this event: Yuzuru Hanyu and Shoma Uno. Yuzuru won the men’s portion of the event, while Shoma followed him in second place.

Yuzuru Hanyu won the men’s event for the second time in his career with a total score of 321.59, 2.28 points ahead of teammate Shoma Uno. Yuzuru’s short program received a score of 98.39, placing him in fifth place, 0.25 points behind China’s Boyang Jin. There were problems with Yuzuru’s program from the start. He was given a one point deduction for not getting into his start position within 30 seconds of taking the ice. Yuzuru opened with a powerful quad loop, but lost balance after landing the quad salchow, the first of a planned quad-triple combination. He barely managed to tack on a double toe loop after regaining his posture. “I’m very frustrated,” Yuzuru said afterward. “That quadruple salchow was a pain. I don’t know why I can’t learn from my past experiences. I’m filled with disappointment.”

Yuzuru’s free skate was given a score of 223.20, a new world record, and the highest score of the night. He landed four quads in his program. After his skate, Yuzuru said, “I feel very regretful from my short program, so I have to train more and more. Because I was concentrating for all I was worth on each and every element, it’s like I’ve forgotten how it went.” He added, “Finally, I can say I’ve worked hard, but maybe I need more (ahead of next year’s Pyeongchang Olympics).”

Shoma Uno came in second in the men’s portion of this year’s World Championships with a total score of 319.31, a new personal best. Shoma’s short program was the second best of the night with a score of 104.86, 4.19 points behind Spain’s Javier Fernandez. This short program score was also a new personal best for Shoma. During his skate, he cleanly executed a quadruple flip, a quad toe-triple toe combination, and a triple axel. “I’m happy to get a very high score,” Shoma later said. “I think the accumulation of all the successes and failures I experienced this past year led to this performance. Last year I ended up in tears. This was a lesson.” He continued, “This year, I’ve been focusing, to be able to finish this competition with a smile.”

Shoma’s free skate was given a score of 214.45, again the second best of the night and a new personal best. He was pleased with his performance. “I’m glad I could give my best performance of the season in a meet where I failed last year. I was just focused on enjoying my program and I was composed in doing exactly that. I wasn’t in crunch mode like last year. I had more breathing room and could savor what the World Championships are like.”

The third Japanese men’s skater, Keiji Tanaka, finished in 19th place with a score of 222.34.

In pairs, Sumire Suto & Francis Boudreau-Audet finished in 17th place in the short program with a score of 61.70. Due to their low score, they didn’t advance to the free skate, staying in 17th place.

In ice dancing, Kana Muramoto & Chris Reed finished in 23rd place in the short dance with a score of 54.68. Due to their low score, they didn’t advance to the free dance, staying in 23rd place.

This years’s World Figure Skating Championships determined the number of spots given for next year’s Olympics and World Championships. The men will retain their three spots for both competitions. The women will lose a spot for both competitions. There will be no Japanese pairs skaters or ice dancers at the Pyeongchang Olympics, but each event at 2018 Worlds will feature one team.

The combined ranking of Mai Mihara and Wakaba Higuchi, the top two Japanese women, was 16, exceeding the requirement of “13 or lower” to secure three Olympic spots, the largest number of slots given to a single country. The last time only two Japanese female skaters went to the Olympics was 2002; three were sent in 2006, 2010, and 2014.

Yoshiko Kobayashi of the Japan Skating Federation, who is in charge of figure skating development, said, “I feel responsible for losing the triple berth. I want the skaters to compensate at the Olympics.”

The last time only two Japanese women went to the World Championships was 2002. During the years since, it wasn’t unusual for Japan to be the only country sending three women to Worlds, due to how well the women the year before performed.

There was a good chance of Japan keeping its third spot in both competitons if it wasn’t for Satoko Miyahara’s hip injury, an injury which caused her to miss World and be replaced by Rika.