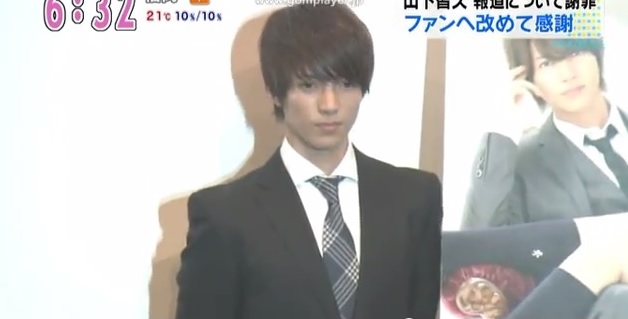 Last October 22, Yamashita Tomohisa attended a thanksgiving stage greeting held for the success of his movie “Kinkyori Renai”. Due to the criminal damage of property case which had been forwarded to the prosecutor’s office last October 21, Yamashita apologized infront of the 400 fans who have gathered.

“Thank you very much for gathering today, and I apologize for using this time and place as I take this opportunity to apologize for having caused trouble and anxiety to many people by my actions lately. I would like to consider one’s standpoint from now on and that I will devote myself with it every day. Thank you for your consideration,” Yamapi said and bowed deeply afterwards. Fans silently listened to him and gave him a warm applause.

The rest of the cast of the movie was originally scheduled to attend the stage greeting and also hold a Halloween costume party. However in view of the circumstances, Yamashita appeared alone in a black suit and apologized to the audience.

The thanksgiving event was held to celebrate the success of the movie, which ranked no.1 at the box office for two consecutive weeks. Yamashita comments “We’re thrilled because I’ve never took first place in movie ranking.”