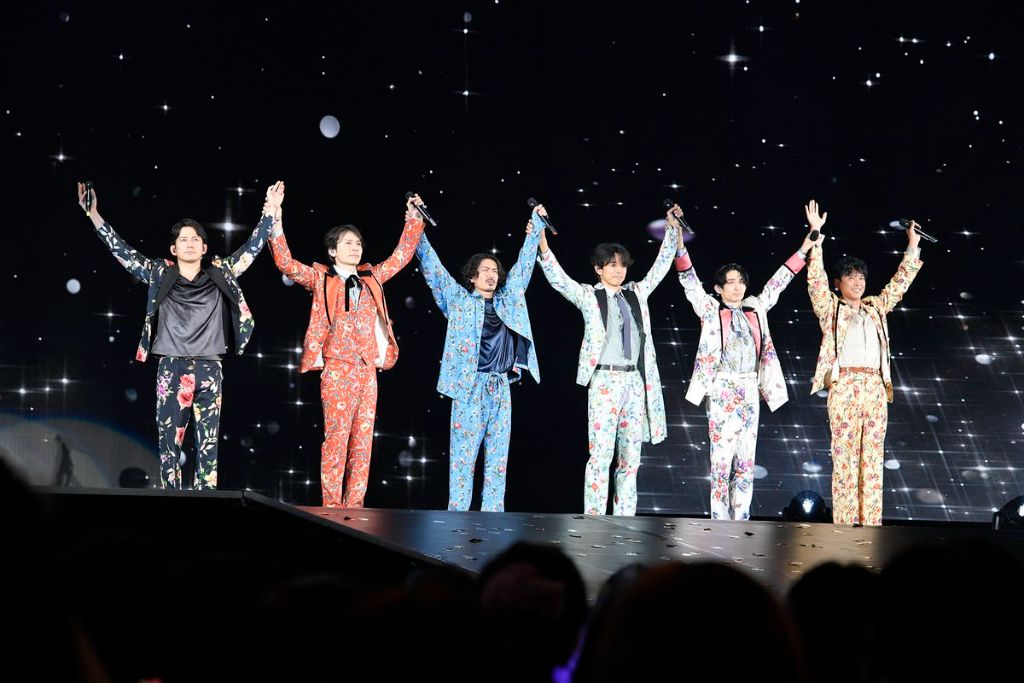 V6 disbanded on November 1 after 26 years. On their last day together, the group donated an olive tree named “Buiroku no Ki” to Nagisa Park in Tokyo’s Edogawa Ward. The group has actively promoted human co-existence with nature and the United Nations’ Sustainable Development Goals. As a final act, V6 wanted to continue with these efforts, while donating something to future generations, hence the tree donation.

The olive tree is known for being a plant of peace, and V6 wishes for peace and that people will be able to overcome all difficulties in their lives. They hope that the olive tree will be loved not only by V6 fans, but by everyone.

On the night of November 1, V6 held the final concert of their final tour, “LIVE TOUR V6 groove”, at Makuhari Messe in Chiba Prefecture. They opened with the song “Ame”, from their final studio album “STEP.” The members were projected on 12 meter long pieces of fabric.

V6 then went into a Coming Century and 20th Century medley, as well as a Eurobeat medley, performing their first four singles. There was also a hits medley, which saw them perform “CHANGE THE WORLD”, “Ai Nanda”, and “WA ni Natte Odorou.” During this part, the stage they were performing on rose 6.5 meters, allowing fans in the higher levels to get a better view.

“There are a lot of things we want to say, but we will deliver them through song. Please think of this as a letter from us. Thank you for following us for 26 years,” V6 said before performing “Me wo Tojireba” for the first time. Before leaving the stage, they shouted “We are V6!”

But there was an encore! Messages from the fans to V6 were projected on a screen, followed by a video of thanks. V6 thanked their fans and sang “95 groove” with a smile, ending their 26 year career.

In some happy news though, Ken Miyake has started his own Instagram account! On the November 2 episode of his bayfm radio show “Ken Miyake no Radio”, he explained his decision, saying that feel didn’t want fans to feel lonely after the end of V6, leading him to open his account. He then performed on Instagram Live for three minutes. Follow Ken here!