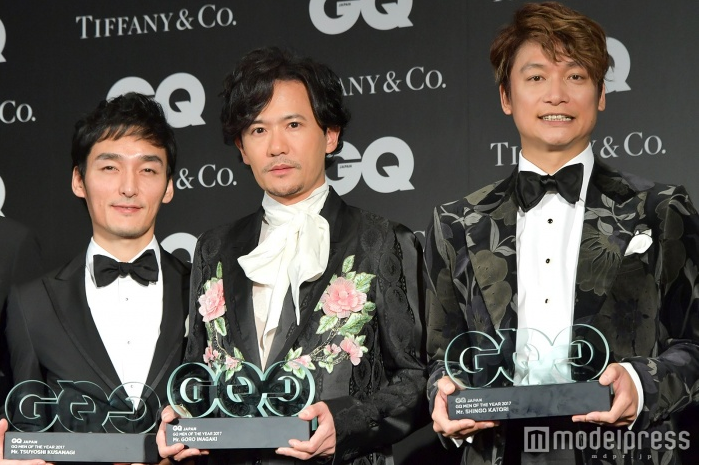 The GQ Men of The Year Awards recently took place in Tokyo, and the buzz around former SMAP members Shingo Katori, Tsuyoshi Kusanagi, & Goro Inagaki attending together dominated the headlines. This is the first time all three of them officially attended a public event together since gaining their “independence” by leaving Johnny & Associates.

The GQ Men of The Year Awards is an annual event held to celebrate men who show outstanding success in their respected fields. Nine men were selected in total this year, ranging from Actors, athletes, and a professional shogi player.  The first set of awards took place in the United States back in 1994, and has since went on to be celebrated in 14 other countries worldwide. This is the 12th year for the event in Japan.

Since leaving Johnny’s all three of them took SNS by storm. Inagaki created a blog, Kusanagi started to vlog on YouTube, and Katori created his own Instagram account. All three have also made their way to Twitter. While all three are very basic things, it’s still a pretty big deal to see former Johnny’s freely use these platforms.

The three have also begun to appear on various variety shows together. Delighted with receiving the award Goro commented “I’m so thankful for receiving this honorable prize. I started this new journey with Katori and Kusunagi-kun full of enthusiasm and am very pleased to be honored. I would like to keep moving forward as an entertainer”

Kusanagi shared that he felt like he was starting from scratch all over again, but he is looking forward to a brand new set of possibilities. Katori also stated that it felt like he was “starting from 0”, but being able to freely use SNS has been a huge highlight. “I’m so pleased to be able to connect with people all over the world. Thank you world!”, shared Katori. He also joked that hopefully this wouldn’t be the end point of his new career, and will continue to try his best.

The other six winners, and official images for Shingo Katori, Tsuyoshi Kusanagi, & Goro Inagaki can be seen on the next page.