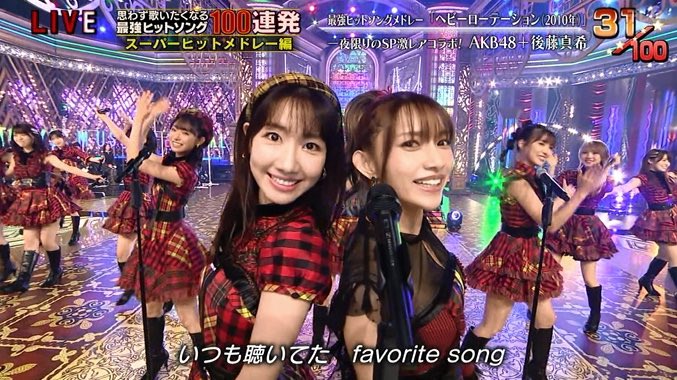 TV Tokyo network just aired the Autumn edition of their annual music show “TV Tokyo Music Festival 2020“, one performer who has been making headlines is none other than living deity Maki Goto! Ever since halting her music activities in 2011, performances from the former top idol have been sparse.

For the Tokyo Music Festival Goto teamed up with AKB48 and performed a medley of their hits. “Aitakatta”, “Flying Get”, and “Heavy Rotation”. The internet was flooded with both positive and shocked comments, seeing someone from Morning Musume OG performing with AKB48, and that a 35-year-old could be so convincible while centering AKB48. Watch the performance below before they get deleted!

AKB48 veteran Yuki Kashiwagi tweeted that being able to perform with Goto was a dream come true.

Fans were also in for a treat as Goto made another surprise appearance, but this time solo. She performed her #1 debut single “Ai no Bakayarou“. The last time she performed this was for her 2007 tour “G-emotion II ~How to use SEXY~”.