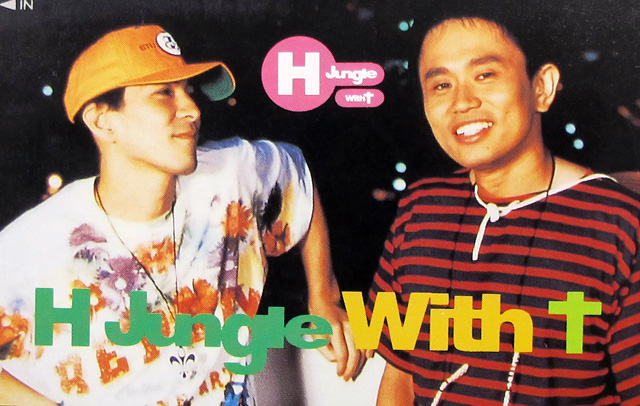 Hey! Hey! Hey! Music Champ made a temporary return in celebration of it’s 20th anniversary. Hosted by the comedic duo Downtown, Hey! Hey! Hey! became one of Japan’s most popular and iconic music shows, along with Music Station and Utaban. The series officially ended after 18 years on December 2012.

A plethora of guests were featured in the 3 hour special. Many of them performing past hits as well as reminiscing their favorite moments on the show. The big surprise of the night was a reunion of the unit H Jungle With t.

H Jungle With t consists of one half of Downtown, Masatoshi Hamada, and Tetsuya Komuro. The units origins start in 1994, during an episode of Hey! Hey! Hey! Masatoshi expressed interest in starting a unit with Tetsuya after the huge success of Ryoko Shinohara’s single “Itoshisa to Setsunasa to Kokoro Tsuyosa to”. A year later “H Jungle With t” was formed, their debut single “Wow War Tonight ~ Toki ni wa Okose yo Movement” sold over 2 million copies. The unit released two more singles and quietly disbanded in 1996.

For the performance H Jungle With t sang their signature debut hit and was joined on the main stage by a variety of guests including GACKT, BoA, T.M.Revolution, MAX, and PUFFY. Many members of the “TK Family” were also present including TRF, Marc Panther, Tomomi Kahara, and Ami Suzuki.

Check out the performance below!