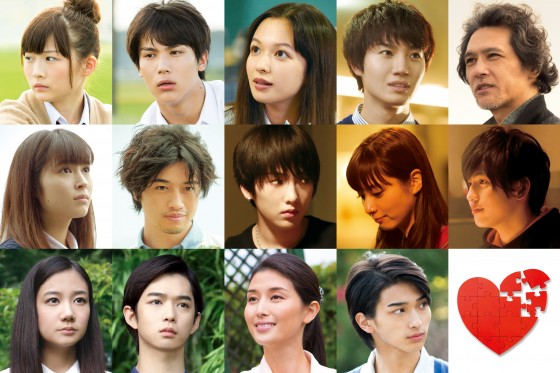 If you like the idea of omnibus movies and ‘Love Actually’ is your declared favourite or hidden guilty pleasure, the upcoming summer movie ‘Zenin, Kataomoi‘ made be the thing for you. Seven creators are getting together to deliver 8 stories of people whose feelings – for different reasons – are not reaching the addressee or remain unanswered. The trailer for the movie has just been released. Check it together with the impressive cast list and premise of each story after the jump!

The promotional campaign for the movie presented each of the 8 stories separately and convinced the audience each title would be a separate full-length production. On the last days of April, the trailer and the title ‘Zenin, Kataomoi‘ (lit. “All, unrequited love”) has been announced, explaining that in fact all eight stories will intertwine in one portmanteau movie.

“Kataomoi Spiral”  written and directed by Keinosuke Hara, features ex-KARA member Jiyoung as a boy with gender identity disorder, mixed in a spiral of unrequited love with his housemates played by Aimi Satsukawa and TAKUYA (CROSS GENE). 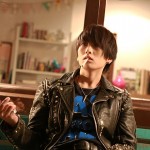 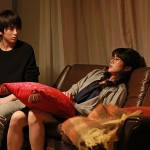 Ken Iizuka (known for ‘Otona Drop‘ or ‘My life change when I went to sex parlour‘) penned the story ‘MY NICKNAME is BUTATCHI” with Taishi Nakagawa and Sairi Ito as high-school student and childhood friends. 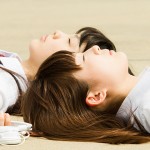 Female director Koto Nagata will deliver to stories: “Boku no Saboten” as both screenwriter and director and “Usotsuki no Koi” as screenwriter. The latter will be directed by Michihito Fujii. “Boku no Saboten” will focus on a “workplace love” between a freshman (Dori Sakurada) and his older colleague (Erika Mori). 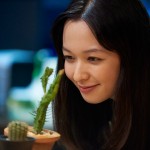 Yua Shinkawa and Jun Shison will lead “Usotsuki no Koi“, where the love tribulations start because of one lie. 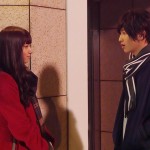 Actor and director Takayuki Takuma is taking care of the story called “Something Blue” about a high-school student played by Alice Hirose, who falls in love in a hairdresser (Takumi Saito). MV director Santa Yanagishi is directing Fumika Shimizu and Yudai Chiba in the story “Asahan no Yuge” about two cousins who start living together in the countryside during summer. Finally, two remianing stories “Eve no Okurimono” and “Radio Personality” are written and directed by Hidehiro Ito. First title will depict a story of a high-schooler (Ryusei Yokohama) falling for a much older nurse (Manami Hashimoto), while the last announced story with Masaya Kato as the lead, might be the leading theme that will bind the rest together. In fact the idea of the movie came from Masaya Kato‘s radio programme about unrequited love that encouraged the listeners to send their “love stories” to a mobile novel site E-Star. The best titles were chosen as base for “Zenin, Kataomoi”. See the trailer for the movie below!