Announced Friday, Ikuta Toma will be starring in a movie adaptation of Isaka Kotaro’s popular 2004 novel Grasshopper. After playing a cold-hearted murderer in the hugely successful 2013 movie The Brain Man, Ikuta and director Takimoto Tomoyuki will once again be working together.

Ikuta will play Suzuki, a man who leaves his job as a schoolteacher in order to infiltrate an underworld organization and take revenge on the person who murdered his girlfriend. Suzuki will meet different assassins, Cicada and Whale, and the story will show how their lives will interlace. Asano will play Kujira (lit. “whale”), a contract killer who specializes in observing his targets, gaining insight into their state of mind and eventually manipulating them into committing suicide. Yamada’s character Semi (lit. “cicada”) is a fellow hitman who takes a more direct approach, utilizing his expertise with knives. 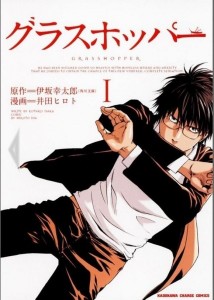 Ikuta expresses his excitement about working for the first time with Asano and he wants to learn a lot from the actor since Asano has made movies in and out of the country. In co-starring with Yamada, Ikuta says that he’s excited to see how [Yamada] pretty looks will transform into someone who nobody has ever seen before. High level of physical strength will be used in this movie that Ikuta wants to go wild as desired.

Filming of “Grasshopper” will begin on July 7. A nation-wide release is planned for fall 2015.