Director Sang-il Lee will turn Shuichi Yoshida’s prose to big screen again, following the international success of their 2010 project ‘Akunin‘ (‘Villain’). The anticipated new movie ‘Ikari‘ (‘Anger’) is a mystery revolving around seven people that are all somehow connected to one unsolved murder case. The poster with all main characters portrayed by amazing cast of Ken Watanabe, Aoi Miyazaki, Satoshi Tsumabuki, Ken’ichi Matsuyama, Mirai Moriyama, Go Ayano and Suzu Hirose has been released together with a trailer that promises a must-watch movie for all cinema connoisseurs.

Are you the killer?

The trailer starts with almost peaceful views of the beaches of Okinawa, ports in Chiba and Tokyo’s gay bars, if not for the police investigation on the mysterious murder case and the word “Anger” left by the criminal written in blood. Then the music and the pacing changes and the trailer warns: “there is a killer among them”. Immediately, all characters start to seem suspicious and capable of the crime. The trailer closes with the foreboding question: “Are you the killer?”.

The poster is composed with portraits of the seven characters, each taken by famous veteran photographer Kishin Shinoyama. In his career of 50-years, Shinoyama had countless studio sessions with famous actors, but for ‘Ikari’ he was trying to capture not the actor, but the role and this was a new, interesting experience, as he explains in his comments. 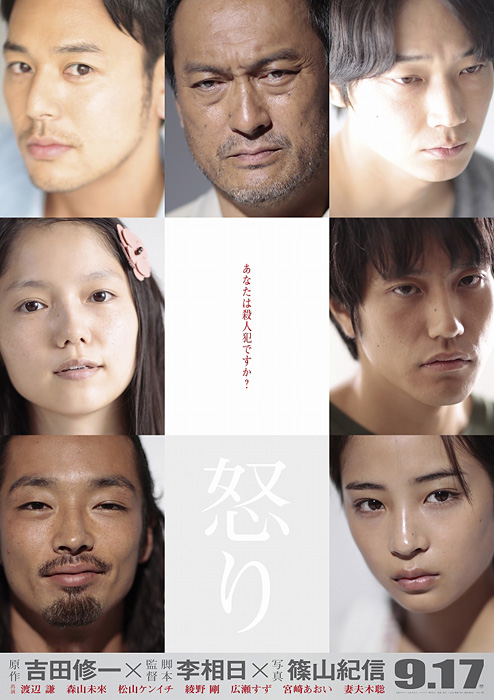 ‘Ikari‘ will screen in Japan from 17th September.