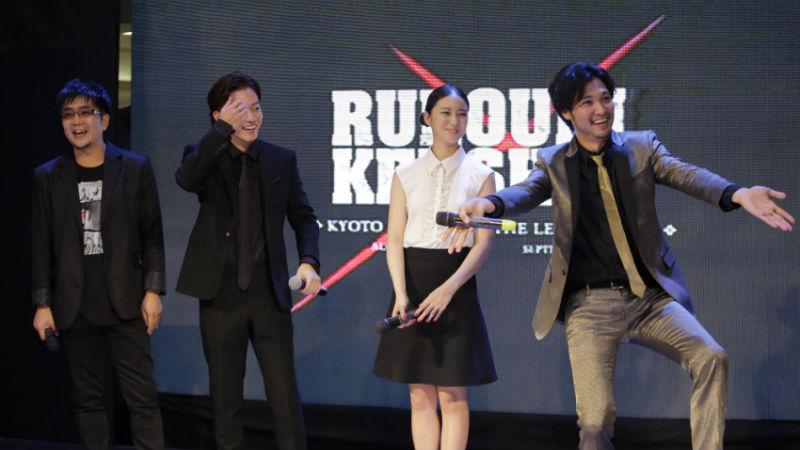 The main cast (Takeru Satoh, Emi Takei, Munetaka Aoki), and director (Keishi Otomo) of ‘Rurouni Kenshin’ arrived in Manila, Philippines last August 6 for the film’s premiere, the only one held outside Japan. They were warmly welcomed by a huge crowd of shrieking fans during the premiere (Wednesday) and public press conference (Thursday), with some of the fans even coming from far flung provinces and as early as the malls’ opening time. The long wait paid off as during the premiere the cast took more than 30 minutes to walk the red carpet, obliging to fans’ requests for autographs and doing selfie with members of the press. Takeru would wave his hand to the crowd whenever he heard them scream “Ta-ke-ru” or “Ken-shin.”

Locally known by the title ‘Samurai X’, the anime version gained popularity when it was shown on local TV. Takeru Satoh and Munetaka Aoki were shocked with the reception they received from Filipino fans. “It’s really beyond my imagination. It’s really very suprising, shocking,” Takeru said of the Philippines. In a ceremony a day after the premiere, they were also designated as “Cultural Friendship Ambassador” to the Philippines. 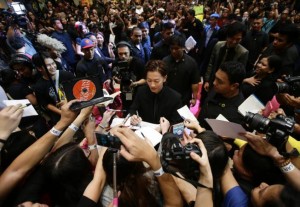 The cast spoke some English and Tagalog to the delight of the fans. “I am extremely happy that I am able to meet all of you. I heard it (the movie) broke the record of any Japanese film (in the box office). In Japan, it was just shown last week and I can’t believe how fast it will be shown in another country. I thank all of you,” Takeru Satoh said. He greeted the screaming fans by asking “Kumusta kayo?” He also said, “Masaya ako makita kayo.” [How are you? I am happy to see you] 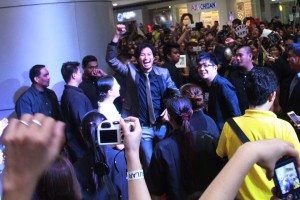 Emi Takei said this was her first time to attend a movie premiere in another country. 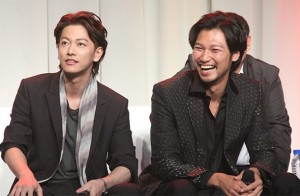 During the public press conference, Emi Takei was not able to attend and had to go back to Japan. While fans weren’t allowed to ask questions during the program, they reacted passionately to queries by the press that referenced the past works of the Japanese actors or the “Rurouni Kenshin” fandom in general. Some lucky fans were given the opportunity to interact with their “Rurouni Kenshin” idols.

How involved was the original creator of the manga in the making of the “Rurouni Kenshin” movie and how was it working with him?

Otomo: I had a lot of meetings with the original writer… I really did a lot of collaborative meetings before we got to make the movie. 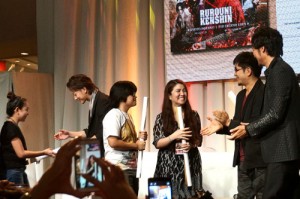 Which living person do you think today is like Kenshin and why?

Aoki: I know, I know! The person is him (points to Satoh)!

Were there times when you were injured on set? How difficult was it during filming when you got injured?

Aoki: I lost a tooth while taping. But I don’t mind because I’m Sanosuke! 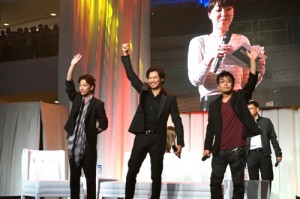 Satoh: I got injured a lot of times so I really can’t specify one incident.

What is your career plan after this series? What do you plan to do and what roles do you want to play?

Satoh: Having been given this major role in my life, it’s really difficult for me to think of what I can do next. But if I were to wish something, I would want to work again with director Otomo and create some movies with him again.

Aoki: Wait, how about me? (laughs)

How would you feel if Hollywood decides to do an English-language remake of “Rurouni Kenshin”?

Satoh: (after hearing the crowd booing): Everybody’s reaction is probably our reaction.

Aoki: Is it no or… scar (pointing to audience members who are making a cross sign with their hands)?

Otomo: I would say go ahead, try it! 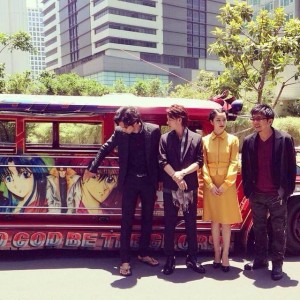 How’s your stay in the Philippines so far?

Satoh: It’s really fun being here in the Philippines. It’s really beyond my imagination that all of you are here. And the reception you have shown us and the movie, it’s very, very surprising. It’s shocking.

Aoki: Mahal ko kayo! [I love you!] I’m very, very excited to be here… I’m not sure [if we will be here for the next movie] but (stands up) I’m very happy! Astig person! [Cool person!] Enjoy the film. Thank you very much. Maraming salamat po! [Thank You!] (Goes on to read the notes written on his hand) Astig! Magandang gabi po! And mahal ko kayo! [Cool! Good evening! And I love you!]

Otomo: It’s really a very surprising reception and of course we hope that you will support our movie. This welcome you’ve given us, I am going to bring this back to Japan. The cast and the crew of this movie really worked hard – we put our lives on the line for this movie and we hope that you really enjoy it. I will certainly bring back this experience to Japan and tell everybody about it.   “

More of the story, video and pictures at sources: