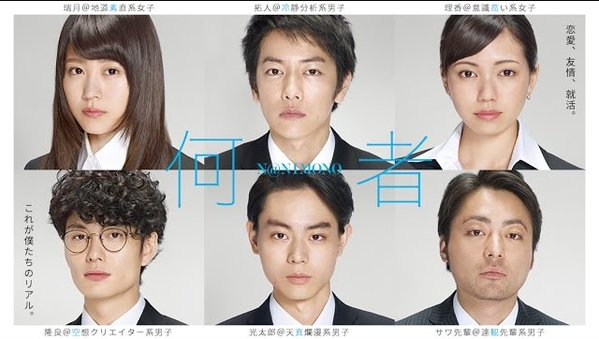 Check out the released poster and trailer for the film “Nanimono” (Somebody) gathering an ensemble cast of Takeru Sato, Kasumi Arimura, Fumi Nikaido, Masaki Suda, Masaki Okada and Takayuki Yamada.

The film is is based on the best- selling novel by Ryo Asai. It follows the lives of five college students who use social media to support each other and voice out their worries about the future. The poster resembles ID photos in resumes for job applications and also displays the characters’ twitter account names. The film will open on October 15. 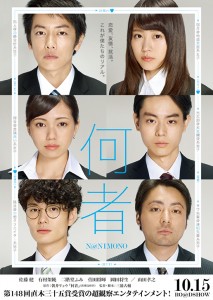 Takuto Ninomiya (Takeru Satoh) observes those around him. His roommate Kotaro Kamiya (Masaki Suda) has a bright personality and communicates well with others. Mizuki Tanabe (Kasumi Arimura) is Kotaro Kamiya’s ex-girlfriend. Takuto Ninomiya has feelings for his roommate’s ex-girlfriend. Rika Kobayakawa (Fumi Nikaido) is determined to land a job. Takayoshi Miyamoto (Masaki Okada) is critical of job-seeking activities, but he later tries to get a job.