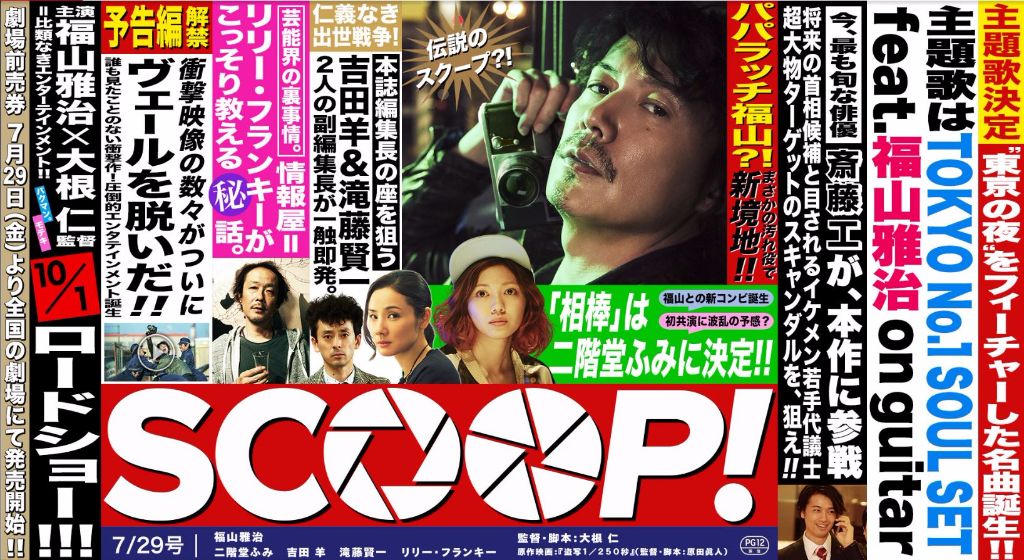 Full trailer has been released for Masaharu Fukuyama upcoming movie “SCOOP!” directed by Hitoshi Ohne. Fukuyama is taking on a lead role of a paparazzi with Fumi Nikaido, Yo Yoshida, Kenichi Takito and Lily Franky in supporting roles. Check the action packed teasers after the jump!

The main hero (Fukuyama) was once a talented and acclaimed scoop-hunter, now a freelance paparazzi focused on celebrity scandals. Fate decides that he is assigned to a rookie journalist from the magazine “SCOOP!” (Nikaido). At first the two cannot find a common language, but soon they start to collect one scoop after another…

Yoshida and Takito will portray editors-in-chief duelling for promotion. Lily Franky is an enigmatic informant. Masaharu Fukuyama also personally revealed during his radio programme, that Takumi Saito will appear as a popular young politician and potential candidate for prime minister’s chair, who becomes one of his main targets.

Director Hitoshi Ohne, whose previous works include “Moteki“, “Koi no Uzu” and “River’s Edge Okawabata Tantei Jimusho” drama, proved to have his own unique sense and visual language. It is his first time to work with Fukuyama.

The theme song will be provided by TOKYO No.1 SOUL SET with special participation of Fukuyama on the guitar.