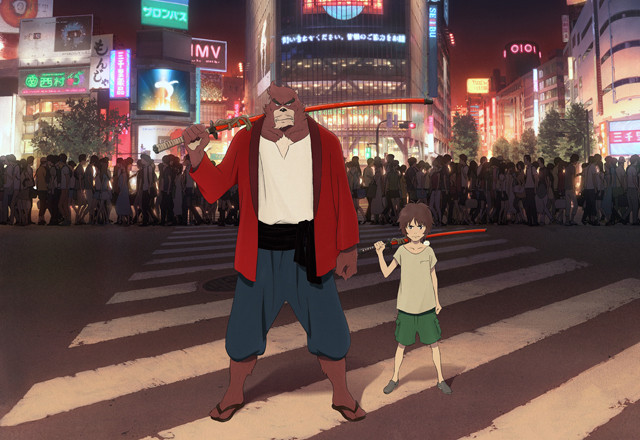 A press conference was recently held at the Toho headquarters, there it was announced that Mamoru Hosoda would be releasing a new animated film written and directed by him. Mamoru’s numerous directorial triumphs include “The Girl Who Leapt Through Time” and “Summer Wars”. Mamoru’s last film was 2012’s  “Wolf Children”, released under his own animation company Studio Chizu. “Wolf Children” became a great success receiving acclaim from critics and becoming the fifth highest grossing movie in Japan for 2012.

Mamoru’s new project is titled “Bakemono no Ko”. The story takes place in Tokyo’s Shibuya ward and a bakemono realm. A lonely human boy  gets lost in the bakemono realm and becomes the disciple of a lonely bakemono. Mamoru chose Shibuya as the setting since he found the lively ward to be very “thrilling”, he also mentioned that “There are surprisingly few animated works set in Shibuya. Even though it’s a famous place, it’ll be novel as a movie setting.” Mamoru further explained the plot of the film:  “The movie is a training story about a boy who was separated from his parents and becomes a disciple of a bakemono (supernatural creature). It’s going to be a traditional yet novel story.”

The script for the film has been completed but they’re still in the process of casting voice actors, production is set to complete next year June. “Bakemono no Ko” will open in Japan July 11th 2015.