Full trailer and additional cast have been released for the live-action film adaptation of the popular manga Kamisama no Iutoori (As the God’s Will) written by Muneyuki Kaneshiro with art by Akeji Fujimura. Directed by Takashi Miike, the film stars Sota Fukushi alongside Hirona Yamazaki  and Ryunosuke Kamiki.

A 2nd-year high school student named Shun Takahata (Fukushi) lives an ordinary teenage life until one day a malevolent Daruma doll appears in front of his class and forces the students to participate in a series of children’s games such as “Daruma-san ga Koronda” with death as the penalty for losing. With no knowledge of who’s behind the games, he’s left with no other choice but to keep winning as his only means of protecting himself and his childhood friend, Ichika (Yamazaki). Meanwhile, a troubled classmate named Takeru (Kamiki) seems to actually be relishing the opportunity to get other students killed.

The rest of the cast include Mio Yuki, Shota Sometani, Nao Omori and Lily Franky.

Daruma: The Daruma-san… Fell!! (“Daruma-san” is similar to the children’s game “Red Light, Green Light.”)
Daruma: Glare.
Text: One day, suddenly…
Text: The Daruma-san killed.
Shun: …What the hell is this…?
Text: 1st period – If you move, goodbye.
Text on Daruma’s back: If you press this, then it’s over.
Daruma: Daruma…
Boy: Wait!
Daruma: ,,,-san fell over!
Girl: Somebody stop this!!
Shun: God…
Text: The end of boring days…
Shun: Give me back my boredom, please.
Text: God’s game began.
Text: 2nd period – My back is itchy
Cat: My back is itchy!
Text: 3rd period – Who’s behind you?
Kokeshi: All right! When you’re talking about games, it just has to be “Kagome kagome!”
Shunta: Stop it!
Text: 4th period – I hate liars
Bear: Who’s the liar!?
Text: 5th period – Can you play Kick the Can?
Nesting Dolls: Game, start!
Girl: No!!
Text: Special Class – Who is the child of God?
Shunta: This is the revolution left behind by God. Those who survive are good. Those who die are evil.
Shunta: God… Means nothing!!
Title: Kami-sama no Iu Toori
Ichika: Bye bye.
Shunta: Ichika!! 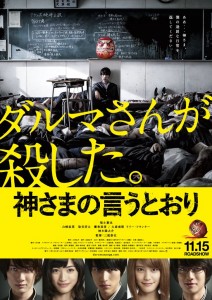