The live-action adaptation of Kengo Hanazawa’s I am A Hero will open in Japanese theaters in a week (April 23). However, it has already received many acclaims from multiple screenings in international film festivals. Most recently, the film won the Grand Prize (the Golden Raven) at the Brussels International Fantastic Film Festival (BIFFF) on March 29. Before that, I am A Hero also nabbed the Audience Award and the Jury Prize in the Orient Express section at Fantasporto – Oporto International Film Festival awards held in Portugal. At the film’s premiere on the 48th Sitges Film Festival in Catalonia, Spain last October, it won the Grand Audience Award and Award for Best Special Effects. 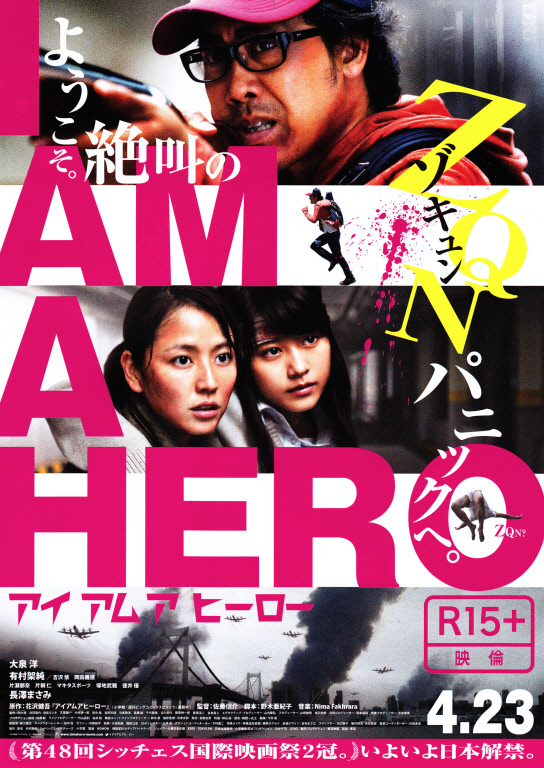 I am A Hero is a zombie survival story that centered on Hideo Suzuki (Yo Oizumi), a struggling manga artist that one day found himself inside a mass outbreak that turns people into cannibalistic undead dubbed ZQN. Armed with a fully-licensed shotgun he happens to own out of hobby, Hideo need to survive in the ZQN-infested world, finding a meaning for his existence along the way. Traveling with him are Hiromi (Kasumi Arimura), a high-school girl he met by chance and a nurse called Yabu (Masami Nagasawa).

The film is directed by Shinsuke Sato (Gantz, Library War, Oblivion Island: Haruka and the Magic Mirror, Princess Blade), with Akiko Nogi (Library War, Sayonara, Robinson Crusoe) at the screenplay. The film’s extensive special effects is handled by Makoto Kamiya (Gantz, Cutie Honey, Resident Evil: Degeneration, Resident Evil: Damnation). Earlier this month, a prequel called I am A Hero: Hajimari no Hi (lit. I am A Hero: The Day It Began) began streaming at Docomo’s dTV.

I am A Hero have been running in Shogakukan’s Big Comic Spirits since 2009; 20 volumes have been published to date. Catch the trailer for the movie below!