Th full trailer for the live-action film adaptation of Saso Akira’s Maestro manga is released. The film stars Matsuzaka Tori as Kosaka, a brilliant concert master, Nishida Toshiyuki as the mysterious conductor Tendo, and miwa as Tachibana Amane, the heroine of the series and a flautist.

Kobayashi Shotaro directs and the movie opens on January 31, 2015.

Kosaka is a genius violinist and concertmaster who rejoins an orchestra which was originally disbanded in the wake of the recession. However, the new prospective members sound terrible together when they gather in a practice room for the first time.

Soon, a mysterious man named “Tendo” appears before them without identifying his position in the orchestra, spouting out rude jokes in rapid succession. The orchestra members are initially put off by Tendo, but when he picks up and waves the conductor’s baton, he opens them up to a world of music they never knew existed before. Meanwhile, Kosaka is eventually able to let go of his emotional scars and frustrations as he regains his confidence as a musician. 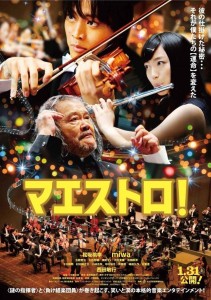