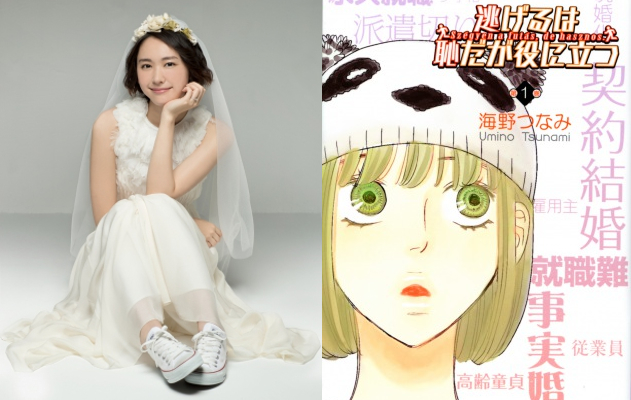 On July 27, it has been revealed that Yui Aragaki will star in TBS’s drama “Nigeru wa Haji daga Yaku ni Tatsu”, which will begin airing this October. The original manga by Tsunami Umino is a love comedy about a couple that begins their relationship with a ‘contract marriage’, in which the husband is the employer and the wife is the employee.  Umino’s work has won the 2015 Kodansha Manga Award (Best Shoujo Manga) and is currently serialized in Kodansha’s Kiss.  It has been 3 and a half years since Aragaki last starred in a TBS drama, the most recent being “Soratobu Kouhoushitsu”.

Aragaki’s character Mikuri Moriyama has a master’s degree but has zero job offers and no boyfriend.  She struggles with feeling like she is not needed and doesn’t have a place where she belongs.  Mikuri then begins working as a housekeeper, where her employer – 36-year old Hiramasa Tsuzaki – suggests having a “contract (common-law) marriage”.

The script will be written by Akiko Nogi, who has worked on “Juhan Shuttai!” and the “Library War” series.  Mikuri and Hiramasa’s relationship will be depicted by questioning “new forms” of marriage and work, as the two gradually begin to have feelings for each other as they live under the same roof and keep their relationship a secret.

Aragaki commented, “I think it will be a fun drama – it’s somewhat of a new love comedy, a ‘business comedy’, and also a symbol of today’s day and age.  I work work hard so the viewers can laugh and sympathize with the characters as they face all kinds of trial and error.”