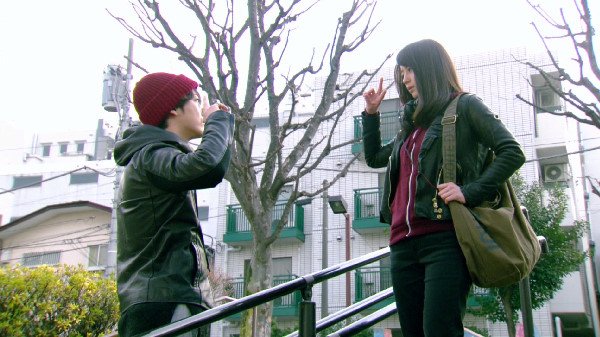 In last Saturday’s broadcast of “Kaito Yamaneko” drama starring KAT-TUN’s Kamenashi Kazuya, Horikita Maki made a cameo appearance as her character Kinomiya Nagisa of “Higanbana” drama. The reunion of the two since 2005’s “Nobuta Wo Produce” drama gained huge response from fans.

The cameo appearance is part of NTV’s drama collaboration where main cast from its 3 dramas will make an appearance on each other’s dramas for episode 6.

During the scene, iconic lines from the drama were used for the dialogue, also with the original background music. After the scene, Katsumura Hideo (Narimiya Hiroki) asked Yamaneko (Kamenashi) “Do you know that person”?, to which Yamaneko answered “It’s an old, old story”.

The moment between the two was short, but instantly related words such as “Nobuta power”, “Nobuta”, “Bicycle”, and “Kaito Yamaneko” trended.

A lot of fans expressed surprise that it has already been 10 years since the drama aired, resulting into a lot of “nostalgic” sentiments on twitter. “Nobuta Power, finally ーーーー!”, “Shuji and Nobuta! So nostalgic”, “Music is also Nobuta! Awesome!”, “Nobuta is back! I am moved!”, “I was able to see Kame-chan’s ‘Bi-cycle’. Thank you!” are some of the sentiments of fans expressing joy for the reunion.

Soon after, various clips from the drama were posted and fans expressing that they feel like they wanted to watch the drama again.

Fans who watched the drama will be familiar with the lines. “Nobuta Power, enter!” was coined to give the bullied Nobuta power. Yamashita Tomohisa, who played Kusano Akira, invented the pose for the line. “Bye-bye-bicycle” is an expression used by Kiritani Shuji (Kamenashi) before leaving. 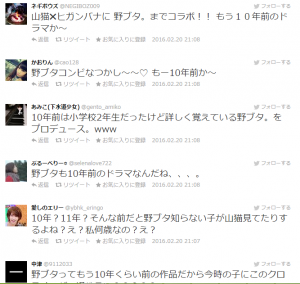