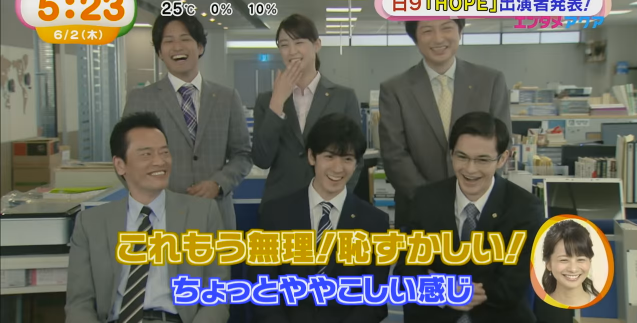 FUJI TV will be showing a remake of the Korean drama “Misaeng”, a drama which gained immense popularity despite a lack of romance in its story, due to its realistic portrayal of the struggles experienced in the corporate world. It received ratings remarkably high for a cable drama. Its last episode achieved the second-highest ratings (10.3%) in cable TV history. Hey! Say! JUMP’s Nakajima Yuto will headline the  Japanese drama titled “HOPE ~ Kitai Zero no Shinnyuu Shain~” (HOPE ~ Zero Expectations for New Employee ~), which will start airing in July every Sunday at 9pm. This will also be his first time starring in a primetime drama.

The rest of the cast are also announced. Nakajima will be joined by Endo Kenichi, Seto Koji, Johnny’s WEST Kiriyama Akito and Yamamoto Mizuki. Director Kono Keita  (“The Great White Tower”, “Freeter, Ie wo Kau”) will be overseeing the production.

The drama is currently in production. Check out some behind the scenes below.

Nakajima Yuto will play the protagonist Ichinose Ayumu who was was aiming to be a professional Go player but failed to make it until the age limit. He started working as an intern in a general trading company. He gets criticized for his lack of knowledge, he does not even know how to use a photocopier. He strives to overcome the challenges and to contribute as a member of the organization.

Endo Kenichi will be playing Ichinose’s superior at work. Both Seto Koji and Kiriyama Akito will be playing as Ichinose’s colleague and rivals. Seto’s character is an elite who has a strong sense of pride and is confident about his abilities while Kiriyama’s character is the moodmaker in the team. Meanwhile, Yamamoto Mizuki will be the only female employee in their department who tries to survive in the male-dominated team, coping with discrimination, sexual and power harassment.