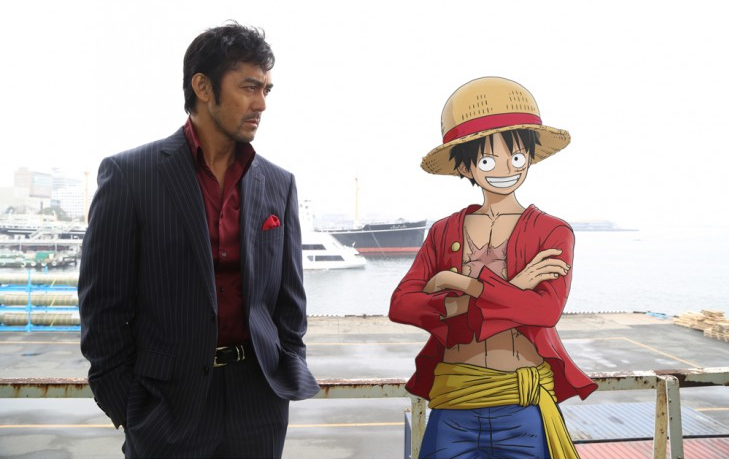 It was announced by FUJI TV that its semi annual omnibus drama Yo nimo Kimyo na Monogatari (Tales of the Unusual) will feature a collaboration with a popular anime for the 25th anniversary of the program, which first aired on April 19, 1990. The April 11 crossover episode stars Abe Hiroshi and the character Luffy from the One Piece manga and anime.

The special is tentatively titled Yo nimo Kimyo na Monogatari 25-Shunen Special Haru ~Ninki Manga-ka Kyoen-hen (Tales of the Unusual 25th Anniversary Special: Popular Manga Creator Competition), and Luffy will appear in a segment titled “The Gum-Gum Man” in the special. Luffy will appear in CG alongside Abe , who first appeared on the show in 1991. The segment’s story centers around a gang lieutenant (Abe) who is severely injured and hospitalized due to a gang fight. He happens upon and eats the Gum-Gum Fruit from the One Piece manga in the hospital, and becomes a Rubber Human. However, his gang has already abandoned him. It is then that he meets Luffy, who reminds him, even as he opposes his gang, of what he has lost and forgotten.

Abe Hiroshi commented, “I’m happy to return to the show after 24 years, since the 25th anniversary is such an important milestone. I couldn’t imagine what it’s going to be like to work with Luffy from One Piece, but since I have no experience with this sort of thing, I happily accepted. I’m looking forward to working with an anime.”

Yo nimo Kimyo na Monogatari is a Fuji TV live-action drama show that aired two episodes per month in 1990, before becoming a weekly program in 1991. Only one episode aired in 1993, and since 1994, the program has aired at least two episodes every year.