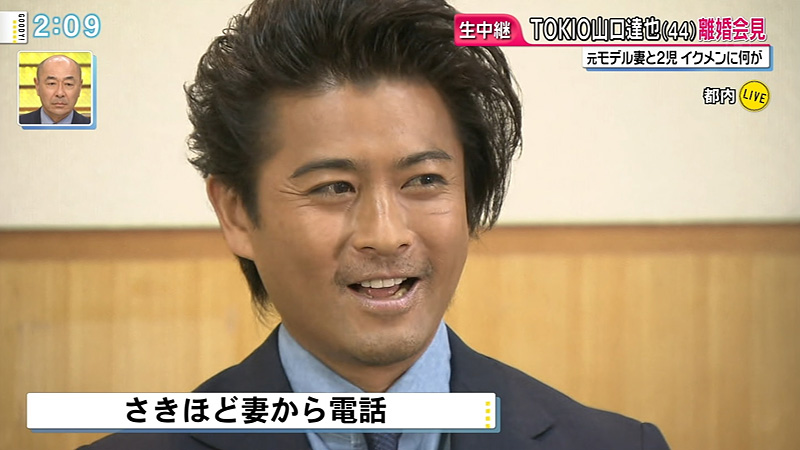 On August 5th, Yamaguchi Tatsuya from TOKIO, announced his divorce through his agency, Johnny’s Entertainment. Yamaguchi married a former model who was five years younger, in March 2008. The two met through a friend and were married for about eight years. They have two sons together.

Yamaguchi is not the only Johnny’s to get divorced. Otokogumi‘s Okamoto Kenichi (father of Hey! Say! JUMP’s Okamoto Keito) and Shounentai‘s Uekusa Katsuhide are also divorcees. Neither of the two were reported to this extent.

This is the first time for any Johnny’s talent to hold a conference regarding divorce. The reason for the conference was because Yamaguchi had asked for one. He wants to “protect his children” and asked for everyone’s “kind consideration” about this topic. This was a subtle warning to anyone who tries to invade the privacy of his now ex-wife or children. On the same day of the announcement, Yamaguchi submitted his divorce papers.

During the conference, Yamaguchi covered several topics. He stated he is on good terms with his ex-wife and that his two children will stay with their mother. He also addressed last month’s incident on Zip! where he appeared on television with bandages on his face. He said those injuries were not related to any private matters; he had an accident when riding a bicycle and his sunglasses cut his face.

Yamaguchi also explained how the two of them came to the decision of separating. Apparently the two were constantly fighting and three years ago, his wife suggested divorce. Since April of this year, Yamaguchi and his wife lived separately. The reason for the split was reportedly also due to his busy schedule. His work left him spending too much time away from family. However, the public views Yamaguchi as a good paternal figure, so many wonder how this event will affect his image and future activities.