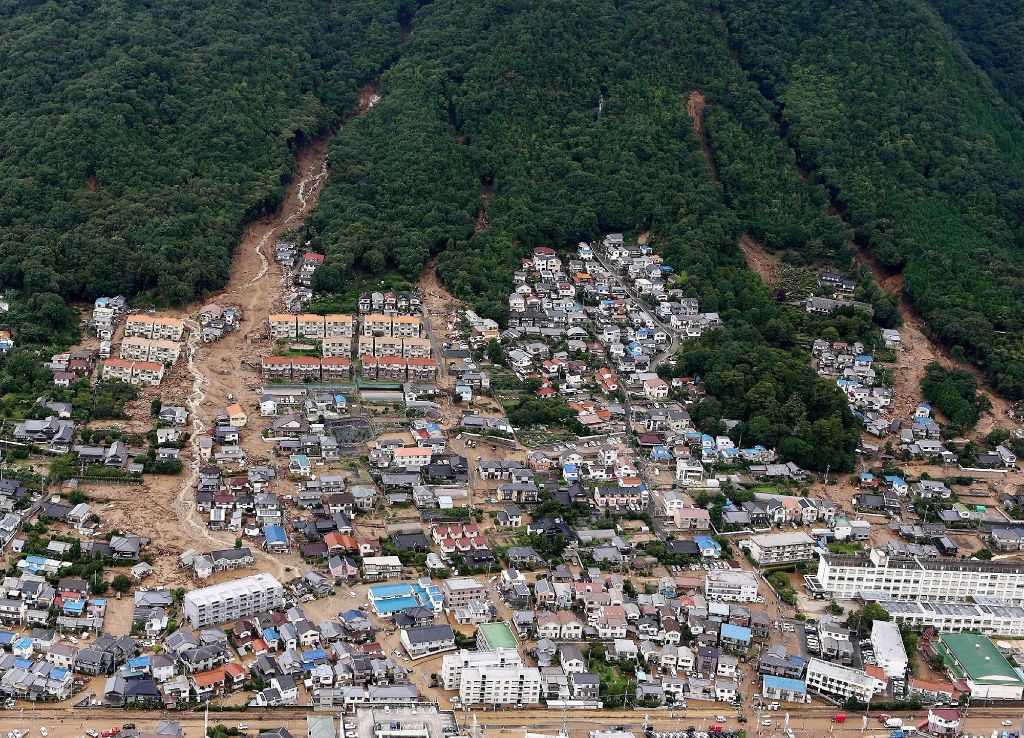 For the past week, Hiroshima prefecture has been struggling with a series of landslides beginning on August 20th following a torrential downpour. The Japan Times reported today that the death toll has risen to 66 with 21 still missing. Several prominent Japanese celebrities born and raised in the region have spoken out on their feelings to spread the word in the wake of the disaster.

Perfume, among the most famous acts to come out of Hiroshima, reached out through their official staff Twitter on Saturday:

We offer our sincerest condolences and sympathy to everyone in the areas affected by the landslides in Hiroshima prefecture. We pray that more people can be saved by these earnest relief efforts, and that all who are currently in shelters can be returned to their normal lives as quickly as possible.
All members and staff

The group visited their hometown at the beginning of this month to kick off their nationwide Gurun Gurun tour and had recently worked with the prefecture to publish the free guidebook “Nakeru! Hiroshima,” later distributed to libraries across the country, in order to help boost tourism in the area. Fans on Twitter have called for donations to be taken at their remaining tour dates in Hokkaido, Aichi, Miyagi and Tokyo, which will resume on the 30th.

Hitomi Shimatani (33), blogging from Okinawa on the same day, posted a photo of a double rainbow and shared her wish that the situation in Hiroshima could improve. She has continued to write about the disaster on her blog as it develops.

Yoshikuni Dochin (35, formerly of the duo CHEMISTRY), who had been scheduled to perform at the annual fireworks display in Akitakata, Hiroshima, expressed his condolences for the dead, missing and hurt in a cancellation notice for the event on Friday, while comedy duo Ungirls‘ Yoshiaki Yamane (38), who hails from Asaminami, where damage has been particularly severe, gave a statement on his blog the same day:

Everyone, thank you for your concern.
I never imagined that I would hear Asaminami
or Asakita’s names in this capacity.

My friends and family were safe,
but the Nenotanigawa River in Kabe where I used to live has flooded and there have been terrible landslides,
and Hiroshima is now in a grave state.

Anything you can do to help is good,
but Hiroshima prefecture appears to be taking donation money,
so by all means, I hope that everyone will make even a small contribution.

It seems there are still some who are missing,
and I pray that they can be found soon.

I believe everyone is desperately searching for those people,
but please take care so as not to incite a second disaster.

The ground will still continue to loosen from here,
so please avoid approaching dangerous areas and find proper shelter.

May all who were lost rest in peace.

Professional baseball pitcher for the Hiroshima Toyo Carp, Kenta Maeda (26), also said his piece at a winning game on Friday, stating, “There was a message from a victim on my blog that said, ‘All I have to look forward to is the Carp’s victory,’ and I hoped that this could help cheer them up.”

Singer and fashion designer MEG (33) flew back to her parents’ home to be with her family in the area and tweeted a link to a Yahoo! donation site on Monday, writing, “Although it may not be much, I’ve also donated. To everyone keeping Hiroshima and the people of Hiroshima in your thoughts, please give them your support.” As of this writing, the collection has amassed over 24 million yen in donations from 27,000 contributors.

These are just a few of the likely many who have spoken on this topic; if you have any more information, please share it in the comments. Our thoughts are with everyone in Hiroshima at this time.