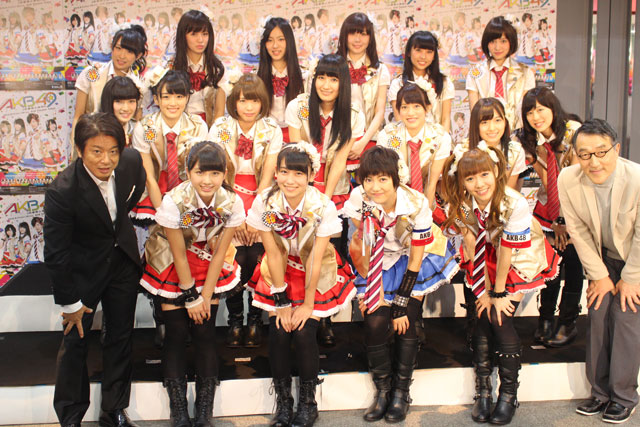 Fans of Sae Miyazawa’s cross dressing will not be disappointed by her role as high school boy Minoru Urayama in the upcoming musical  ‘AKB49~ Romance ban laws~’.

The musical is based on a manga of the same name, which features the group ‘AKB48’. It contains many cross dressing antics with the main character Minoru Urayama cross dressing as a girl to help his crush enter the idol group, and ending up being picked at the audition himself!

On the 11th of September at the public dress rehearsal for the musical the cast members took part in an interview.

Sae Miyazawa who is taking on the main role was enthusiastic stating “Although before I have had experience of playing ‘a boy like girl’, this is my first time taking on two roles of a girl and a boy so I am really fired up. I thought if someone else got this role I would be really frustrated. I also cut 10 centimeters off my hair which I was growing until now. It’s scraping the back of my neck!”

Akari Suda who is playing the rival character spoke about Sae’s role saying “Sae is really cool! She honestly looks like a man.”

The musical will be running at the AiiA Theatre in Shibuya  until the 16th of September.