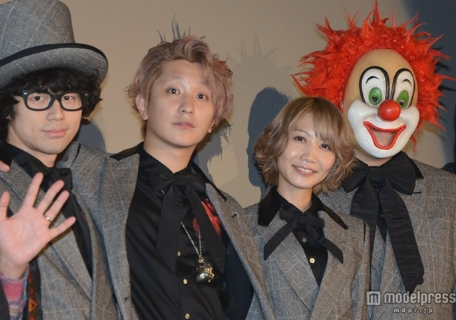 It was announced today on their website that SEKAI NO OWARI’s pianist, Saori gets married! In addition, the leader, Nakajin, has announced his engagement.

Saori marries 30 years-old actor Dai Ikeda who has appeared in dramas like Ando Lloyd – A.I. Knows Love? and Yamegoku: Helpline Cop. Nakajin, on the other hand, has been engaged to a non-celebrity woman. The two announcements were exclusively for the fan club members.

SEKAI NO OWARI is scheduled to have their stadium tour this year beginning on January 22-23  at Saitama Super Arena. They will also perform five shows nationwide including Kyocera Dome Osaka on February 11-12.

Regarding my private affairs, I have decided to get married with the actor, Dai Ikeda. We have been in a relationship for 5 years, and there has been difficulties in my work as well as my health.  I was able to come this far thanks to his support. Although the two of us are still inexperienced, we have decided to walk together. I would like to build a warm family as an individual and as a member of SEKAI NO OWARI. Please support us from now on.

Thank you for your never ending support! Although this is about my private affairs, I have decided to be engaged with a non-celebrity woman who has been with me for quite a time. It has been around 4 years since we started dating, yet she supported me in my rough times. As a bachelor, I am still inexperienced. But I would like to overcome difficulties in the future with her. I decided to get married in order to become more energetic during band activities. Please support us from now on.