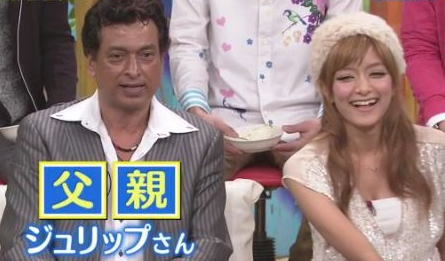 Since the June of last year, popular talent variety show presence Rola has continued her activities under the shadow of her father’s scandal and subsequent fleeing of the country. In June of 2013, it was discovered that Rola’s father, Julip Al-Asa had attempted to fraud the Japanese national government out of approximately 875,000 yen, or $9,000. At the time, a warrant was issued for his arrest, but he fled the country and returned to Bangladesh.

Since then, Rola has issued one apology on her blog, but remained mum on the manner. She continued to appear on variety shows and went on with her activities as a media personality. The subject was touched upon in several of her TV appearances, with some fellow celebrities defending her, insisting that she had no responsibility for what her father did. Meanwhile, the entire time, her father’s exact whereabouts were unknown, and there was some suspicion that Rola herself was aware of where her father was hiding. Rola has also been criticized for continuing to appear as normal on television as if nothing has happened.

Recently, it was revealed that Rola allegedly met with her father in secret, hinting that she very well knew of his whereabouts. However, these allegations have not been concretely confirmed. It was also reported that her father was continuing his lifestyle normally in Bangladesh. At the end of last year, when asked about what she thought of how she spent the entire year, Rola replied “I don’t really remember.” This struck viewers as odd because her father was still on the run at the time, and she herself faced a huge scandal because of his alleged criminal activity.

Things came to a climax just last month when Julip, along with a lawyer turned himself into the police. However, he denied all charges. Rola was once again under heat. She had managed to skate around the manner with a simple apology and playing  innocent (as per her character, as alleged by netizens), but now, she would have no choice but to speak up. It should be noted that by this point, her television appearances have greatly lessened.

Since the arrest, Rola appeared on SMAPS’s “27 Jikan Terebi.” She also made a blog post, stating “I am sorry for causing so much trouble. My father, with his lawyer has turned himself in to the police. I want him to do what is difficult, and what is right.” Since then, she has been seen very little. Since her appearance, Japanese netizens’ opinions have become quite strict, with some demanding that she and her father leave the country and pay back all the money that was taken by fraud. Others have expressed dislike of Rola’s character and her handling of the situation through simple apologies.

From now, it is uncertain what Rola will do concern her television career. It is also uncertain what will become of her father, as he may face jail time and possible deportation in the future.