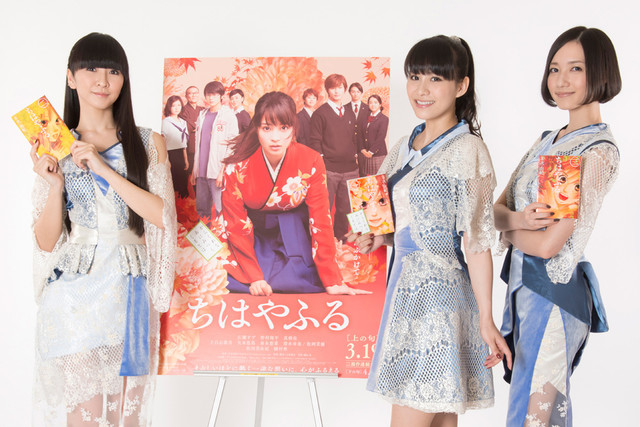 The manga “Chihayafuru” has spawned an anime series, a novel series, and now a movie. The movie adaption of “Chihayafuru” will hit Japanese theaters next spring. The first part, “Chihayafuru ~Kami no Ku~” will be released on March 19, while the second part, “Chihayafuru ~Shimo no Ku~”, will be released April 29. The manga, created by Suetsugu Yuki, debuted in 2007. It tells the story of a schoolgirl named Ayase Chihaya who starts playing the card game Hyakunin Isshu karuta competitively after befriending a new classmate named Arata Wataya. Over the years, she loses contact with her friends and Wataya moves away. Now in high school, Chihaya comes back in contact with an old karuta-playing friend, Mashima Taichi. The duo forms a karuta club at their school, with Chihaya hoping that she will come in contact with Wataya again.  Chihaya Ayase will be played by Hirose Suzu, the new classmate will be played by Mackenyu, and Mashima Taichi will be played by Nomura Shuhei.

Perfume will sing the theme song for the “Chihayafuru” movies. The theme is a new song titled “FLASH.” There is mutual love here, seeing as how Suetsugu Yuki is a fan of Perfume and Perfume are fans of “Chihayafuru.” Today, the trailer for the movies was released. “FLASH” can be heard in it.  There is is no word on when “FLASH” will be released. Check out the trailer after the jump!