More details have been revealed on Marvel’s collaboration with Attack on Titan!

A preview of the upcoming issue of “Brutus” magazine shows us the first panel from the collaboration. The special will be called “Attack on Avengers” and will feature various characters from “Guardians of the Galaxy” and “The Avengers” batting it out with Colossal Titan, Female Titan, Armored Titan, and others in New York City. The crossover will be in English, a Japaneses translation guide will be included with the issue. The plot was created by Hajime Isayama, the creator of Attack on Titan.

An interview with Marvel’s Senior Vice President C.B. Celbulski will also be featured in the issue. He talks about Attack on Titan’s growing popularity in America, correlating it to the feeling that “Americans are becoming prisoners”.

Celbulski supports his thoughts by talking about how tough today’s youth has it. Metal detectors at the entrances of high-schools are quickly becoming a common sight and in some places children are even banned from playing outside. This might causes some of them to feel like they’re living in “confined walls”, and perhaps that causes them to heavily emotionally invest in Erin and his friends’ constant battle with the Titans beyond their cities walls.

Celbulski also used the phrase “nothing scared” when talking about Attack on Titan, referring to how major characters in the series will suddenly die.

The new issue of “Brutus” will be released Saturday November 15th. 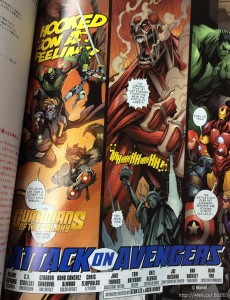