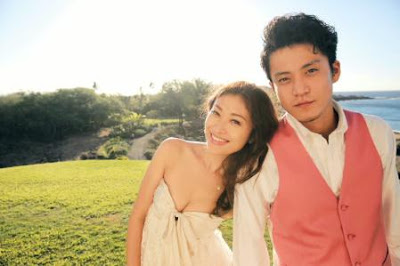 Husband and soon-to-be-father Oguri Shun recently spoke his inner thoughts about marriage, thoughts which turned out to be not exactly positive.

According to Model Press:

Actor Oguri Shun has frankly revealed his true thoughts about marriage. On the Fuji Television talk show show “Bokura no Jidai” aired on the 24th, an extravagant conversation between the producer Ninagawa Yukio, Ayano Go and Oguri Shun occurred.

Ninagawa told Oguri Shun, who married model Yamada Yu in December of 2012, “In order to be a good actor, I want you to be unhappy. It’s fine it you got married, but you need to find a separate hurdle that you have to suffer through by yourself.”

“Now I don’t have any freedom. I don’t know whether there is someone looking from somewhere, and I don’t know what I should do,” Oguri commented. “It is tough to live side by side with someone. With all of the things good things I have had by myself up until now, that [living side by side with someone] would have been impossible,” he said, showing a bewildered look when talking about his time as a bachelor.

Real Intentions of “Wanting to continue on alone” Become Clear

In addition, Oguri and Yamada share the hobby of theater appreciation, and the two participate in theater going together exclusively. However,  “Honestly, there are times I want to go alone,” Oguri inadvertently reveals. “She says ‘Then say so!’ but surprisingly I don’t say it. Regarding the things I have done in my life, I don’t want Yamada to think that I have any evil feelings. Because there are various responsibilities that I want to her to grant me,” he said, masochistically revealing his frank way of thinking.

Oguri Shun Suggests Common Law Marriage and Gets a Reply of “Are you stupid?”

Being an actor is the kind of work in which there are various stimuli that become the fuel for a performance. Oguri Shun, who has worries in his head about the balance of work and family suggested common-law marriage, a way to create that balance. “You create a child and give birth to it. But when I said there are times when [people say] ‘We are not a married couple’ she said ‘Are you stupid?’,” also disclosing that his suggestion was rejected.

Oguri’s wife Yamada is currently pregnant with their first child. A precious glimpse of the current anguish and unabashed frankness of Oguri Shun, who is soon to be a father, was put out for the world to see.