As she was about to really try and fight him off, the second man appeared from an opposite side (which just so happens to be in the direction of where another member lives). The second man tried to pin her down, but she started to scream for help. He promptly covered her mouth with his hand.

As this was going on they were all started by the sound of the elevator which diverted their attention, allowing Yamaguchi to escape from them and head towards the corridor. She was unable to contact police right away as her cellphone was stolen. The men were eventually detained by police, and charged with assault. As of her making the tweets he has already been released. 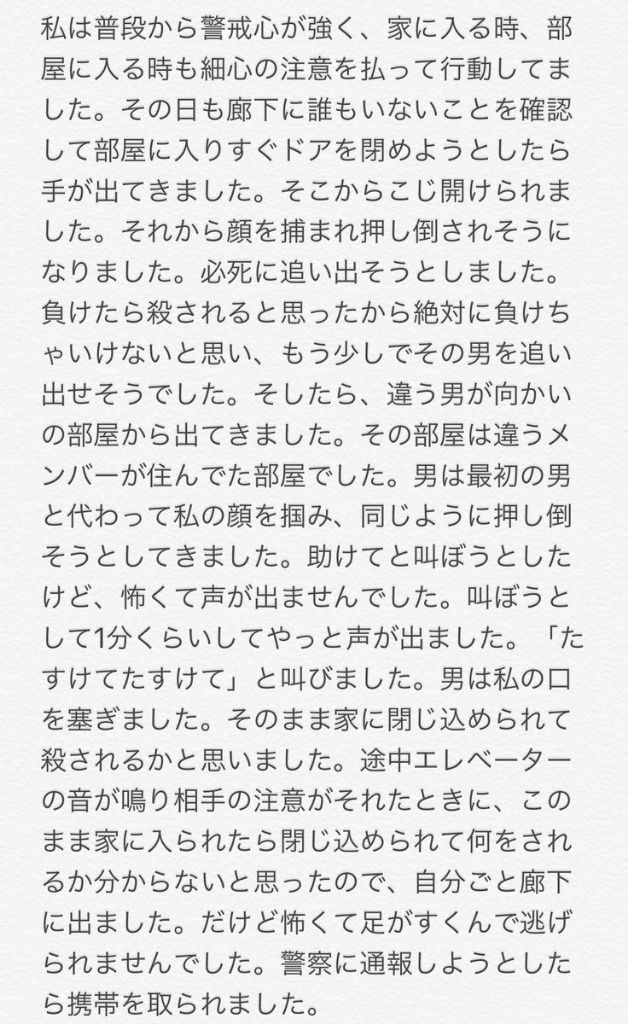 A summary of the primary tweets can be seen here, courtesy of fryan_get on Twitter.

Fans have now began to speculate about which member(s) planned the attack, or leaked Yamaguchi’s personal information. Members being speculated on is Ayaka Tano and Marina Nishigata from Team NIII. Around that time Yamaguchi unfollowed some members on Twitter and Instagram, and in a now deleted tweet stated

“I want to defend these girls and what they stand for. No matter how many things we have to put up with that I cannot tolerate, I want to protect Team G even more so. There are my companions with me, whose love can prevail against any hatred, sadness, and anger. That I am in the same team as these members is, for me, a salvation. It’s the energy that helps me keep going nowadays. I feel thankful that we could go on to form one single team all together. I am thankful that I could get to meet you all. I love you.“

This was originally posted on December 9th, around the time of her assault.

However, in a quickly deleted tweet Nakai was critical of Yamaguchi’s confession about the attack, having strong words for her group mate saying “So is getting into love affairs the right choice, instead?”. Again, this is all just fan speculation. No member has been named a culprit yet.

Japanese media has slowly started to report on the story and as traction begins to rise on the subject NGT48 management will no doubt have to properly address the incident.