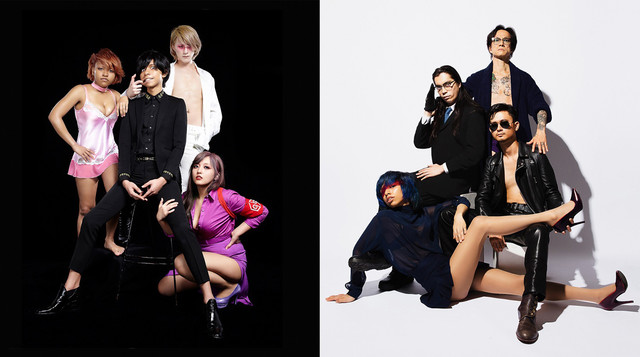 On May 11, Ziyoou-vachi and Gokumonto Ikka will release the split single, “Kinsei / Shibou Yuugi.” This single sees both bands of vocalist Avu-chan facing off against against each other. Gokumonto Ikka is a band that Avu-chan formed on the side with Nagaoka Ryosuke (Petrolz), KenKen (RIZE), and Nakamura Tatsuya (LOSALIOS / MANNISH BOYS).

In keeping with the versus theme of the single, the cover art features Ziyoou-vachi and Gokumonto Ikka drawn as video game characters on the verge of fighting. The cover art was created by Nishimura Kinu, a Capcom creator who is best know for her work on the “Street Fighter” series. The Limited Edition features a booklet similar to those that come with video games.

Ziyoou-vachi recently released the music video for “Kinsei.” It’s mainly a performance clip, but it does feature Avu-chan in both of their male form and female form (as does the single’s cover art and promo picture). Check it out after the jump, along with more information on the single!