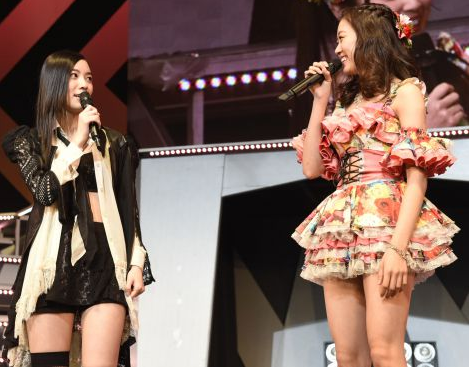 It was announced on January 23 during “AKB 48 Request Hour Set List Best 1035 2015” held at the Tokyo Dome City Hall that both SKE48 and NMB48 will be releasing their new singles on the same day on March 31.

In May 2012, Sashihara Rino’s solo debut single was released at the same time as AKB48’s official rival group Nogizaka46’s 2nd single, but this is the first time for a direct confrontation between sister groups.

During the event, a VTR of SKE48’s staff and NMB48’s staff having a meeting was played on screen. SKE48 ‘s theater manager Imamura Etsuro concluded the meeting “I want to launch it at this period (March)” to which NMB48’s theater manager Kaneko Takeshi responded “Let’s try it to liven up the entire group” and proceeded to firmly shake hands. Echoing the theme of “Battles Without Honor and Humanity”, it was announced that SKE48’s 17th single will be released simultaneously with NMB48’s 11th single.

Members of both groups who watched the VTR was not able to hide their surprise. SKE48’s Akari Suda commented “It seems like “Battles Without Honor and Humanity” will start?”, and Yamada Nana stated “The battle will be settled then!”. Takayanagi Akane who is a member of both SKE48 and NMB48 anxiously said “I want to say one thing, It would be great if the fans of both groups wouldn’t fight over this.”

After the show, manager Imamura updated his Google+ account. “In consideration of our members and fans’ mental states, we wanted to avoid releasing on the same day if possible. However, the record companies of both groups wanted to release a new single in March, among other various circumstances. Although it was a tough decision, we decided on SKE and NMB’s simultaneous release”.

Members Watanabe Miyuki, Yamada Nana, and Takayanagi Akane concurrently hold positions in both groups and fans raises concerns if the members should cancel their concurrent post for the meantime. New song titles and selected members of both groups for the new singles are yet to announced.