2017 is a very important year for pop-rock band Mr.Children, as it marks the 25th anniversary since the group first signed to a major record label.  The band will be kicking off the celebrations early by releasing their Asadora theme “Hikari no Atelier” as a single, the group’s first in over two years, on January 11th.

In addition to “Hikari no Atelier”, the single will also include rearranged studio live versions of several classic tracks and a pair of lives from their “Niji” Hall Tour earlier this year. All of these songs were performed by an ensemble consisting of the four core band members, SUNNY (Keyboard & Backing Vocals), Takuo Yamamoto (Saxophone), icchie (Trumpet), and duo Charan-po-Rantan’s Koharu (Accordion).

Read on below for a look at the cover and track list for Mr.Children’s brand new single. 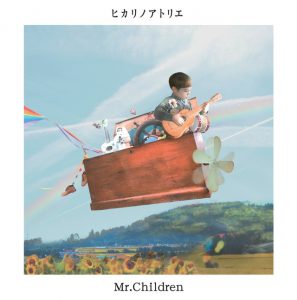